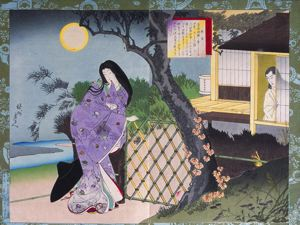 Credit Line: Purchased with funds from the Aoki Endowment for Japanese Arts and Cultures
Accession Number: 2005.1.40

Marks
Signed Yoshu Chikanobu.
Medium
Colored ink woodblock print; oban diptych.
Object Description
In the Tale of the Heike (Heike monogatari) Book 10, Chapter 8 describes the fatal love affair of the beautiful Yokobue, a servant to the former empress Kenreimon-in, who is attracted to Saito Tokiyori. Tokiyori's father intends for him to marry someone of higher rank, but the boy objects and at the age of nineteen became a Buddhist monk and secluded himself in a hermitage outside Kyoto. Yokobue, distressed by his decision and knowing only the name of the temple where he was reportedly living, went in search of her lover. According to the Heike text, as she reached his dwelling place, a full moon rose above the Oi River. She called out his name.

Tokiyori "peeped through a chink in the sliding door and saw her standing outside, exhausted from her strenuous search. Even for the most fanatic devotee of the Buddha, it was a sight that could not fail to restore earthly affection." However, Tokiyori asked another priest to tell her that no on by the name "Tokiyori" lived there, having taken a Buddhist name when he left the secular world. Yokobue left, sad at heart but determined to follow Tokiyori's example, a nd she became a nun at Hokke-ji, near Nara, where she died not long after she sent a poem to Tokiyori:

Once I shaved my head,
There was nothing to regret
In this fleeting world,
For I was unable to grasp
Your heart - a flown-off arrow.

Chikanobu depicts the moment when Yokobue is outside Tokiyori's retreat, but despite her seductive glance and languidd stance, he withstands her temptations. He seems to scowl at her as he tightly grips the window panel. Autumn grasses and fall foliage symbolically signal the end to their love affair.


Publisher
Takekawa Unokichi
Keywords Click a term to view the records with the same keyword
This object has the following keywords:
1891-1912, Females, Houses
Portfolio List Click a portfolio name to view all the objects in that portfolio
This object is a member of the following portfolios:

Your current search criteria is: Objects is "Stories of Famous Japanese Women: Yokobue".