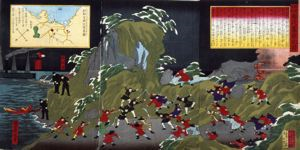 The previous Korean King Ch'olchong had died in 1864 without a male heir, and a twelve year old distant relative became King Kojong. His father assumed the role of regent and the traditional title of Daewongun (Great Court Prince). Immediately the imperial palace in Seoul was rebuilt, having lain in ruins since its destruction by the Japanese in 1592, and the regent reshaped the government following strict Confucian principles. Daewongun made numerous enemies as he consolidated power, diverted funds, and pursued an isolationist policy toward Western countries. In 1874 Queen Min's relatives were able to force Daewongun's retirement, and because the Min faction was greatly concerned about European colonial expansion in Asia (particularly in China), they negotiated an alliance and trade treaty with Japan, signed in 1876. This treaty called for an exchange of diplomatic missions between Korea and Japan as free and equal sovereign states and opened Korean ports only to Japanese traders. Western powers protested. Rather quickly Japanese merchants flooded Korean markets with manufactured goods and acquired land for residences and warehouses, claiming the rights of extraterritoriality. The treaty proved unequal for Korea and caused widespread economic and political turmoil.

The Min faction sent a fact-finding delegation to Japan in 1881 to observe how Japanese military and government offices were organized, and King Kojong established a special unit within the Korean army to learn modern warfare technologies and strategies. The old army elite were angered over such special treatment and resented the Japanese officer who was sent to train the new unit. In September 1881 a plot by supporters of Daewongun to overthrow King Kojong was discovered, but the king's father was not directly involved. However in 1882, when corrupt Min family officials mixed army rice rations with chaff, in order to keep grain for themselves, soldiers in the regular army rebelled, killing the Paymaster-General Min Kyom-ho and the Japanese training officer. The Japanese legation fled to Incheon and then back to Japan, where Minister Hanabusa reported that Queen Min was forced into hiding and Daewongun had retaken control of the government.


Publisher
Kobayashi Testujiro
Keywords Click a term to view the records with the same keyword
This object has the following keywords:
1880-1885, Battle, Maps
Additional Images Click an image to view a larger version