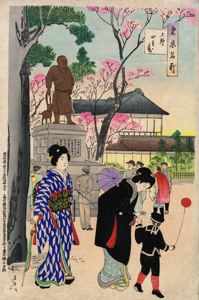 Credit Line: Purchased with funds from the Aoki Endowment for Japanese Arts and Cultures
Accession Number: 2005.1.37

Marks
Signed Chikanobu.
Medium
Colored ink woodblock print; oban tate-e.
Object Description
Chikanobu produced this series in 1902, juxtaposing images of modernity with images of people dressed in kimono and pursuing traditional activities. This print is typical of this series, showing two kimono-clad women accompanying a boy dressed in a Western-style sailor suit and holding a red balloon. In the background, several park visitors are admiring the bronze statue of Saigo Takamori and his dog. The statue by Takamura Koun (1852-1934), one of Japan's first modern sculptures, was dedicated in 1893 as a way of recognizing the achievements of this popular personality. Saigo is casually dressed in a summer robe (yukata), to emphasize the human aspects of the man, rather than in military uniform or formal attire which would draw attention to his failed military efforts in the 1877 Satsuma Rebellion, for which he was posthumously pardoned by the emperor in 1889. The boy's sailor suit, alluding subtly to Japan's recent naval successes in the Sino-Japanese War, seems an ironic counterpoint to this statue of an army general, who had unsuccessfully advocated Japan's territorial expansion into Korea nearly 30 years earlier. Observing the statue are two men wearing traditional workers' garb and a gentleman dressed in a tweed suit and Western hat, suggesting that people from all backgrounds were welcome to enjoy the park and see the statuary. Chikanobu presented in this print the merging of old and new, the successful coexistence in Japan of modernity and tradition.
Provenance
Purchased by Prof. Bruce Coats in Japan from Yamada Shoten.
Publisher
Meiji 35 / 1902 / 4 month / 2 day
Keywords Click a term to view the records with the same keyword
This object has the following keywords:
1891-1912, Cities, Gardens
Additional Images Click an image to view a larger version

Your current search criteria is: Objects is "Famous Sites of Tokyo: Sanno Slope in Ueno".