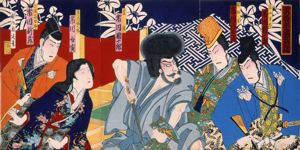 Credit Line: Purchased with funds from the Aoki Endowment for Japanese Arts and Cultures
Accession Number: 2005.1.32

Marks
Signed: âYoshu Chikanobu hitsuâ
Medium
Colored ink woodblock print; oban tate-e.
Object Description
The Heike warrior Taira Kagekiyo (died 1196) had been captured at Dan-no-ura but escaped and was hunted down by Hatakeyama Shigetada (1164-1205). Shigetada blinded Kagekiyo and imprisoned him in a cave. Despite repeated tortures, Kagekiyo continued to declare his loyalty to the fallen Heike. The Genji shogun Minamoto Yoritomo (1147-1199) ordered Kagekiyo's wife and children brought in to get him to change his mind, but the old man refuses. His daughter Hitomaru even tried to free him by selling herself in prostitution, but Kagekiyo refused her efforts.

In this scene from the play "Escape of Kagekiyo" (Buyu maki shussei Kagekiyo), Chikanobu depicts Kagekiyo, played by Ichikawa Danjuro IX (1838-1903), at center, blindly wielding a short sword. No one seems threatened by his actions, though. At right is Shigetada in blue, played by Ichikawa Gonjuro (1848-1914), in front of Yoritomo, acted by Ichikawa Yaozo VII (1860-1936), and at far left is Ichikawa Shinzo (1861-1897) as Miho Yashiro. The faithful daughter Hitomaru is the onnagata identified as Ichikawa Metora, who would in 1888 take the name Ichikawa Monnosuke VI (1862-1914). That same year the handsome actor Shinzo would lose an eye, so these events help to date the print to the mid 1880's.


Publisher
Takegawa Unokichi
Keywords Click a term to view the records with the same keyword
This object has the following keywords:
1880-1885, Actors and Actresses, Ichikawa Danjuro IX, Kabuki, Plays and Theatre
Additional Images Click an image to view a larger version