Pair of Shoes for Bound Feet 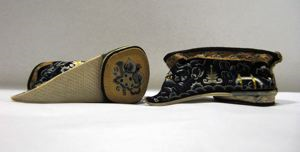 Commentary
This Pair of Shoes for Bound Feet, 1890-1900 (T1010) from the Scripps College Permanent Collection is made of black silk with various embroidery motifs on the top and bottom. The shoes are mainly covered in blue and white satin stitches depicting pavilions, waves, flowers, and other plant motifs. The top of the shoe is trimmed with a yellow/tan band embroidered with flowers, the back of both shoes has Tao symbols, and on the bottom of each heel there is an embroidered amphibian motif.
Foot binding was a tradition that spanned across ten centuries in China. Early evidence of the practice comes from the tomb of Lady Huang Sheng, the wife of an imperial clansman, who died in 1243. Archaeologists uncovered tiny, misshapen feet bound in gauze and placed in uniquely shaped shoes within her tomb. Foot binding is historically thought to be inspired by a talented 10th century court dancer named Yao Niang with feet bound into the shape of a new moon. The story goes that Niang entranced emperor Li Yu by dancing on her toes inside a six-foot golden lotus decorated with ribbons and precious stones. After this performance, court women gradually took up foot binding. Like the tiny corseted waists of Victorian England, bound feet were a status symbol of the elite class and represented the height of refinement. Exclusively
a womanâs practice, from the performer to the performed upon, foot binding was rooted in ensuring marriage. Prospective mother-in-laws would note the bound feet as an indicator that the girl had already suffered without complaint and would therefore be a subservient partner to their sons. The most desirable brides had feet that were three-inches or smaller known as the âgolden lotus.â Four-inch feet, or âsilver lotus,â were respectable but anything over five inches were dismissed and known as âiron lotuses.â2
After the Mongols invaded in 1279, foot binding became an especially important expression of Han identity that continued to be a source of Chinese pride for centuries. The Chinese people saw the practice as a sign of their superiority over the uncouth barbarians who ruled over them. The practice was outlawed in 1912 but foot binding still persisted into the 20th century.3 There are still a small number of women who survive today in rural villages with bound feet, but in modern day China foot binding is considered a disgusting âOld Chinaâ practice.
The intensive and painful foot binding process took around two years to complete. The process began when the girls were between the ages of four and six because they were old enough to tolerate the pain but their feet were not yet too big. First the feet were plunged in hot water and the toenails were clipped short. The feet were then massaged and oiled before all the little toes were broken and bound flat against the sole. After that the arch was strained as the foot was bent almost in half. The now mangled foot was then bound using a silk strip, measuring ten feet by two inches. Every couple days the binding was removed to prevent infection and excess flesh was either removed or encouraged to rot. The girls were forced to walk long distances in order to hasten the breaking of their arches. As time went on the wrapping became tighter and the shoes smaller. Once completed, a deep cleft was present in the bottom the foot that could hold a coin in place. The resulting bound feet could not be reversed without going through the whole painful and lengthy process again. Bound feet resulted in a particular walking gait that relied on thigh and buttock muscles for support. Because of their limited mobility, women with bound feet were often not of the working class or had to perform their tasks from a sitting position.
The shoes worn on the bound feet were deemed âlotus shoesâ due to the lotus bud shape of the feet. Lotus is one of the eight auspicious symbols of Buddhism and symbolizes purity. A higher heel was often added onto the shoe to make the feet appear smaller. In addition, the shoes were often made shorter than the foot to decrease the apparent side of the feet.5
This particular pair of lotus shoes from the Scripps Collection is made of black silk and embroidered with auspicious symbols. Black symbolizes sublimity, equality, righteousness, and solemnity and was a color often reserved for the elderly. The pavilion and floral motifs probably are a reference to the elaborate gardens of the elite. On the heel of both shoes is an embroidered amphibian which is most likely a frog. The frog is a symbol for fertility because the word is pronounced the same as the word for baby.6 Women often sat around with their tiny feet propped up, meaning it was important to have both the tops and the bottoms of the shoes decorated.
Pair of Shoes for Bound Feet, 1890-1900 are in exceptional condition considering they are over 115 years old. The clean soles and good condition of the silk suggest that these shoes were not worn by someone walking around too much. Unfortunately, other than being worn by a leisurely woman, the color and various symbols do not clearly indicate who exactly wore these shoes.


Object Description
Silk shoes for bound feet; pair. Embroidered with flowers and pavilions in blues and white on a back ground. Tao symbols on the back of each shoe, and amphibians embroidered on the bottom of the heel.
Keywords Click a term to view the records with the same keyword
This object has the following keywords:
Shoes, Textiles
Portfolio List Click a portfolio name to view all the objects in that portfolio
This object is a member of the following portfolios:

Your current search criteria is: Objects is "Pair of Shoes for Bound Feet".