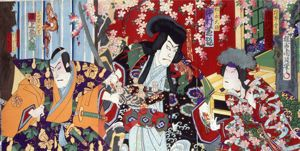 Credit Line: Purchased with funds from the Aoki Endowment for Japanese Arts and Cultures
Accession Number: 2005.1.6

Marks
Signed: âYoshu Chikanobu hitsuâ with red toshidama seal
Medium
Colored ink on paper; oban triptych.
Object Description
Nakamura Shikan IV (1830-1899) stars in the role of the evil Matsunaga Daizen Hisahide (1510-1577), who has caused the murder of the shogun Ashikaga Yoshiteru (1536-1565) and seized control of the imperial capital of Kyoto. Daizen is flanked here by Kano Yukihime on the right, played by the onnagata Ichikawa Sadanji I (1842-1904), and by Mashiba Tokichi on the left, acted by Onoe Kikugoro V (1844-1903), standing before the Kancho Waterfalls near the famous Golden Pavilion (Kinkaku-ji).

Kinkaku-ji is the 4th act of the 5 act puppet play "The Gion Festival Chronicle of Faith" (Gion sairei shinkoki), first performed in the Osaka joruri theater in 1757 and in the Kyoto kabuki theater in 1758. Loosely based on historical events in Kyoto during the mid-16th century, the play concerns Matsunaga Daizen's maniacal pursuit of power and women. He wants Yukihime to be his mistress, but she refuses because she still loves her husband whom Daizen has imprisoned. At this point Konoshita Tokichi (actually the warrior Mashiba Hisayoshi) arrives to offer his services to Daizen even though he is only 4 feet tall.

Daizen replies "A warrior's soul is what matter, and one should judge a man on whether he is good or evil, or so they say. But every man has his vices, and one of mine is the game of go. Here is a board. What say you to a game, Tokichi?" When Daizen loses the game, he throws a bowl for holding the game pieces into a well and demands Tokichi retrieve it without getting his hands wet. Tokichi uses a pipe to divert water from the waterfalls into the well, so that the bowl floats to the top. He returns the bowl to Daizen using the overturned go board, as illustrated by Chikanobu.

The same play with the same cast is advertised in a poster dated January 1883 by Chikanobu's friend and teacher Toyohara Kunichika, and a comparison is instructive (2005.1.5). Like Chikanobu, Kunichika places Daizen in the center panel, but offset and above Yukihime, making Daizen seem less formidable. Kunichika's whole triptych composition is unbalanced and rather cluttered, with Tokichi shown at right with Yukihime's husband, played by Ichikawa Kodanji V (1850-1922) and Sato Masakiyo, a retainer of Tokichi performed by Ichikawa Udanji (1843-1916), standing before the waterfall. Chikanobu carefully framed the scene with a blossoming cherry tree at right and cliff at left, giving a tighter focus to the image and greater emphasis on the three actors. Kunichika placed the secondary figures at the edges of the composition, so that the layout is more open and less controlled. Kunichika's Daizen seems less threatening. Although the kabuki stage set with its red walls and painted waterfalls are nearly the same, the placement and position of the dragon in Chikanobu's design integrates that magical animal more clearly into the composition. In the play, Daizen already has asked Yukihime to draw a dragon, because her father had reportedly been taught the secrets of painting by the Kancho Waterfalls dragon, but she refused his request. Later in the scene, Daizen ties Yukihime to the cherry tree, but she escapes by using her feet to arrange flower petals in the shape of a mouse that comes alive and eats through her bindings. Thus, Chikanobu's dragon is visually more important to the composition and alludes to events not shown in this scene.

In both prints, the faces of the actors are obviously standardized and rather stiff. However, Chikanobu's rendering of Daizen's oji wig with its exaggerated topknot and long side locks helps to accentuate his violent character, and Daizen's black robe with a green dragon adds to his powerful form (in contrast to Kunichika's use of a phoenix design on Daizen's robe that rather softens his shape). In both prints Daizen uses his right arm to wield his sword, but Kunichika emphasizes that grip by fully exposing the hand. However, the left arm in Kunichika's design is tight against the body, creating a more closed form, while in Chikanobu's version, Daizen's left arm extends toward Yukihime, as if he is pushing aside his sword sheath to grab her hand. The tension between these two characters is more apparent in Chikanobu's design.