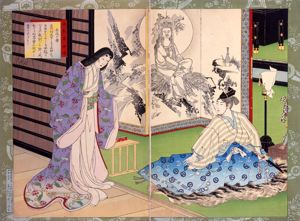 Credit Line: Purchased with funds from the Aoki Endowment for Japanese Arts and Cultures
Accession Number: 2004.1.30

Marks
Signed: âYoshu Chikanobuâ
Medium
Colored ink on paper; diptych.
Object Description
The ten year old boy Kusunoki Masatsura (1326-48), following his father's defeat and death at the Battle of Minatogawa in 1336, considered committing suicide, but his mother stopped him, reminding him of his moral obligations to support the emperor and to lead his family. Masatsura would go on to be an important warrior for the imperial cause, and the wife of Kusunoki Masashige (1294-1336) would be honored later as the epitome of a strong and virtuous mother. Chikanobu has presented this scene in front of a folding screen / byobu that carries an ink painting of the White-robed Kannon, the Bodhisattva of Compassion, an appropriate Buddhist deity to oversee this emotional parental appeal.

Kusunoki Masashige has long been considered the paragon of devotion and loyalty to the emperor. He valiantly supported Emperor Go-Daigo (1288-1339) in his efforts to rest control of the government from military clans in Kamakura in order to establish direct imperial rule. Thus, in the Meiji Period when shogunal leaders were again overturned and replaced by agents of the emperor, Masashige, his wife and two sons became even more famous as examples of selfless loyalty. Both Masashige in 1336 and his sons in 1348 were asked by their emperors to fight battles in which the imperial forces were vastly outnumbered, and each warrior dutifully followed imperial commands, knowing death was certain.


Provenance
Purchased by Bruce Coats in Tokyo in March 2004, using Aoki funds.
Publisher
Takegawa Seikichi
Keywords Click a term to view the records with the same keyword
This object has the following keywords:
Females, Meiji (no date)
Additional Images Click an image to view a larger version

Your current search criteria is: Objects is "Stories of Famous Japanese Women: Wife of Kusunoki Masashige".