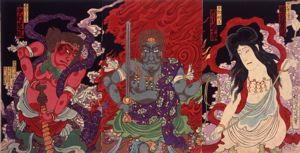 Credit Line: Purchased with funds from the Aoki Endowment for Japanese Arts and Cultures
Accession Number: 2004.1.11

Alternate Title: Ichikawa Danjuro IX in the role of Fudo Myoo, with other actors

Edition
Fine impressions with gauffrage and metallic pigment.
Marks
Signed: âYoshu Chikanobu hitsuâ
Medium
Colored ink woodblock triptych on paper.
Object Description
A character in "The Tale of the Heike" and kabuki plays, Mongaku experienced a religious awakening at the age of 19, took vows and entered the life of a wandering ascetic. As an austerity, Mongaku prayed beneath the Nachi waterfalls, standing under the icy falling water for 21 days, to prove his piety. In response, the deity Fudo Myoo appeared to him. The triptych depicts Fudo Myoo, played by Ichikawa Danjuro IX (1839-1903), and his heavenly attendants Kongara doji, played by Nakamura Shikan IV (1830-1899), and Seitaka doji, played by Suketakaya Takasuke IV (1838-1886), to his left and right. Surrounded by an aura of roiling flame, Fudo is the protector of Buddhist teachings. He holds a sword to strike down non-believers and a rope to bind them.

"In this triptych, surging flames and smoke surround three kabuki actors portraying the roles of the Buddhist deity Fudo Myoo (center) and his two attendants Kongara doji (left) and Seitaka doji (right). Ichikawa Danjuro IX, a member of the famous Ichikawa kabuki acting family, plays the central figure of Fudo. In 1690, Danjuro I devoted himself to this guardian of the Buddhist faith, and this role was closely associated with each generation of the Ichikawa Danjuro lineage." (TC, student in 2010 seminar ARHI154 Japanese Prints)
For more information, please refer to the Chikanobu exhibition catalogue.