Mirror of the Ages: Series Title and Table of Contents 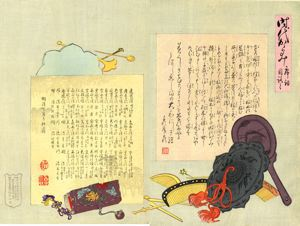 Credit Line: Purchased with funds from the Aoki Endowment for Japanese Arts and Cultures
Accession Number: 2004.1.7

Edition
Fine impression with gauffrage.
Marks
Signed Yoshu Chikanobu in the upper right. Seal in the lower right, and text written down the lower left margin.
Medium
Color woodblock print; ink on paper; oban tat-e.
Object Description
To celebrate and document the fashions of former times, Chikanobu created a chronological presentation of beautiful women in sumptuous garments. Above the foreground figures are pictorial insets which make reference to the era of the costume, creating a possible setting for the clothing. The Scripps College collection has 12 of the 40 single sheet images and the two page introduction/ table of contents. Production of the series was begun in 29 Meiji (1896) on the 9th month 5th day by Matsuki Heikichi, with the table of contents issued 30 Meiji (1897) on the 9th month 1st day, probably on completion of the entire set and possible reprinting of earlier issues.

Within a very limited compositional format, showing just the head and shoulders of the women (some with gesturing hands or held objects), Chikanobu has created a variety of poses and facial types. Some women appear to be in their teens while others are middle aged. None are elderly. Some are married while others appear to be courtesans. Most appear to be well dressed in urban clothing styles. All have distinctive well-kept hairstyles with appropriate combs, flowers, ribbons or other decorations. Following traditional "big-head" (okubi-e) portraits of Utamaro and Sharaku, their faces are in a 3/4 profile, and the women do not look out at the viewer, but seem otherwise engaged or lost in thought, allowing the audience a sense of voyeuristic observations. However, the overt imposition of moods or psychological stereotypes (such as those portrayed in Utamaro's work) seems not to have been Chikanobu's intent. While the inset panels show people of various ages and social classes, the featured women seem well-to-do and mainly of the middle and upper middle classes.

The colors used in this series are rich, usually warm in tone and often thickly applied. At least ten of the backgrounds are in shades of pink, 10 in shades of yellow-gold, and ten in pale green or blue. A few, like the Kansei image (2001.2.71), have mica flakes added to give a glistening effect. The highly detailed hair strands and fabric patterns required minute carving of the woodblocks and very precise printing alignments, so that this series appears to have been a deluxe production, at least initially.

The secondary inset panels vary from detailed street scenes to countryside views, from objects set in abstract space to figures presented in stage-like settings. Most insets are printed in shades of black ink on a uniformly light brown background, but some are lightly colored. All the insets are given a ragged edge, as if these are worm eaten sheets of old paper. (This "aging" technique was used by Yoshitoshi in his 1889-92 series Shingata sanjurokaisen : "New Forms of 36 Ghosts," although his edges are more dramatically deteriorated.) The title page has images of 3 bronze mirrors, along with bamboo and lacquered combs and hairpins. One mirror is a Chinese style lobed form with a red silk cord attached to a boss on the mirror's backside. The polished reflecting side of another lobed mirror is partially visible above the table of contents. The other mirror has a cast handle, typical of Japanese style mirrors, so the two reflecting devices suggest the union of Chinese and Japanese traditions, although the images in the set are purely Japanese.


Provenance
Purchased from Auction Ukiyo-e; originally from the collection of the late Robert O. Muller.
Publisher
Matsuki Heikichi
Keywords Click a term to view the records with the same keyword
This object has the following keywords:
1891-1912, Fashion, Text
Additional Images Click an image to view a larger version

Your current search criteria is: Objects is "Mirror of the Ages: Series Title and Table of Contents".