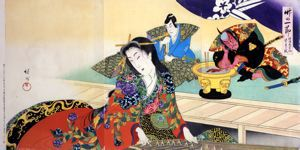 Credit Line: Purchased with funds from the Aoki Endowment for Japanese Arts and Cultures
Accession Number: 2003.1.53

Edition
Fine impression with gauffrage and lacquer.
Marks
Signed: âYoshuâ with red toshidama seal
Medium
Colored ink woodblock triptych on off-white paper (three oban tate-e).
Object Description
Akoya, an entertainer in Kyotoâs Kiyomizu zaka pleasure quarters, was mistress to the Heike warrior Taira Kagekiyo (died 1196), who was captured at the Battle of Dan-no-ura in 1185 but had escaped. The Genji commander ordered Hatakeyama Shigetada (1164-1205) to interrogate Akoya to find out Kagekiyoâs whereabouts. Akoya was brought to the palace at Horikawa, where Iwanaga Saemon Munetsura, Shigetadaâs assistant, proposed to torture her. In kabuki productions, Iwanaga at this point has his men display various physical torture devices, to the delight of theater audiences. But Shigetada plans to test her in other ways.

Akoya claims that she does not know where her lover Kagekiyo is hiding. To ascertain her honesty Shigetada has three musical instruments brought in, a koto (zither), a shamisen, and a kokyu and asks her to perform. She sings of her love for Kagekiyo, an aristocrat who has accepted the duties of a warrior in this time of need. Her voice is so steady, and her playing of each instrument in turn is so pure that Shigetada knows she is both sincere in her affections and honest in her answers. Akoya is released from the âKoto torture.â In this dramatic composition, Akoya is shown close-up and her interrogators sit inside the palace behind her. Shigetada, a cultured man, holds his fan erect as he leans forward to hear her words. Iwanaga, an uncouth individual, rests his elbow in a brazier. Although he is scowling and seems bored, in performance the actor begins to move his fingers in rhythm with Akoyaâs playing, showing that he too is affected by her sad songs. This play was originally written for the puppet theater, and Iwanagaâs movements on the kabuki stage are supposed to mimic those of a joruri puppet, an acting style called ningyo buri. Chikanobuâs composition is surprising in the extremely close foreground placement of Akoya, which is further emphasized by the hazy background on the left side. In the mid to late 1890âs, major changes were taking place in Chikanobuâs depictions of kabuki plays. Focus was put on the principal characters, who were depicted without identifying labels and in visually simplified settings. Chikanobu and his publisher Matsuki Heikichi assumed the audience for such prints would have known the storyline of the play and would appreciate the subtleties possible with a close-up image. Kunichika at this time was also creating more abstract backgrounds for his kabuki posters published by Akiyama Buemon or Fukuda Hatsujiro, but he continued to use calligraphy on the print to identify the actors and their roles. Kiyochika was designing bijin triptychs in 1896 for Takekawa Seikichi with large foreground figures similar to Chikanobuâs Akoya, but with very different line quality and color schemes. Chikanobuâs series âBamboo Jointsâ proved popular enough that it was reissued in 1905, and remains among his most powerful visual image groups.


Publisher
Matsuki Heikichi
Keywords Click a term to view the records with the same keyword
This object has the following keywords:
1880-1885, Courtesans, Musicians
Additional Images Click an image to view a larger version

Your current search criteria is: Objects is "Chronicle of the Dan-no-ura Helmet, Koto Torture Scene".