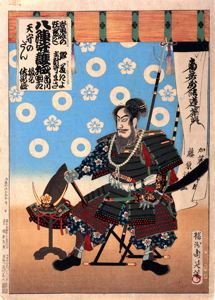 Credit Line: Purchased with funds from the Aoki Endowment for Japanese Arts and Cultures
Accession Number: 2003.1.22

Medium
Colored ink and mica woodblock print on off-white paper (oban triptych).
Object Description
The alleged poisoning of the great warrior Kato Kiyomasa (1562-1611) was the subject of a kabuki play that premiered in 1807, but due to government censorship at the time, the main character's name was changed Sato Masakiyo. According to legend, Masakiyo was summoned to the shoguns's castle in Kyoto and offered a cup of wine, which he knew was poisoned but drank out of loyalty. The lethal mix was slow acting, and allows the actor several dramatic scenes. The penultimate 8th Act takes place in Masakiyo's own castle keep where he prepares to die, seated in his armor on a campaign camp stool. Beside him is his famous battle helmet with horns flanking an oversized courtier's cap. Behind is the white banner that Kato Kiyomasa always carried into battle, with the Buddhist inscription "Namu myoho renge kyo" (Praise to the Lotus Flower of the Everlasting Secret Teachings), a talisman supposedly written by the famous Japanese spiritual leader Nichiren (1222-82). In this print, Ichikawa Danjuro IX (1839-1903) is Masakiyo, a role that resonated with the samurai ethos of devotion and duty.

Kato Kiyomasa, was a major political figure in the wars to consolidate Japan and a ruthless leader during the invasions of Korea in 1592 and 1597, when he was called the Kishokan ("Demon General"). Early in his career he had joined forces with Toyotomi Hideyoshi (1536-98), to become one of the famous "Seven Lances" (Shichihon yari) of Hideyoshi during the 1583 Battle of Shizugatake. As a reward for bravery, he was named the military governor (daimyo) of Kumamoto in southern Kyushu. As a staunch Buddhist he came into conflict on the island with other daimyo, who were recent converts to Christianity. Thus, Kiyomasa's sincere belief and vigorous support of Buddhism became an important part of his personae. In the late 19th century Kiyomasa was again publicly popular as one of those who had promoted Japan's political interests in Korea, which was a topic of discussion in the Meiji government.

Publisher
Namikawa.
Keywords Click a term to view the records with the same keyword
This object has the following keywords:
1886-1890, Ichikawa Danjuro IX, Kabuki, Soldiers and Warriors
Additional Images Click an image to view a larger version

Your current search criteria is: Objects is "Kato Kiyomasa".