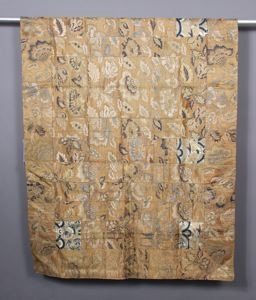 Medium
Faded red silk satin lampas.
Object Description
A seven-columned Buddhist priestâs robe (kesa) in blue or pale yellow plain weave silk with a golden-brown silk inlay weave. The kesa is woven with eccentric weft to create a design of flowers and leaves; in this style, the pattern is set into the weft and other weft threads are woven in to keep the pattern in place. This pattern of holly leaves, Chinese bellflowers, and pinks is done in white, pale green, and light blue silk thread. The pinks are shown from the bottom, as if the viewer were standing beneath the flower. Small patches cut from a pattern of stylized waves, dragons, and lotus flowers have been affixed to the kesaâfour in the corners within the borders, and two behind the shoulders along the top border. The four small corner patches have come to represent the Four Celestial Monarchs (J. Shitenno), also known as the Four Guardian Kings, who âguard just and virtuous rulers, protect the state, defend Buddhist law, and stand sentinel at the cardinal points of the universeâ (Dusenbury, 258). The two patches flanking the robeâs central column represent Buddhaâs attendants.

A seven-columned kesa such as this is more specifically known as an uttaraso and would have been draped over the left shoulder and used as outer wear. The patchwork nature of the kesa points to its origins as a funzo-e, literally meaning ârobe made from excrement.â According to Buddhist texts, only soiled and discarded scraps of fabric were appropriate for the construction of Buddhist robes. Most surviving kesa, however, are constructed from rich silk fabrics; nonetheless, they retain the patchwork ethic of earlier robes.