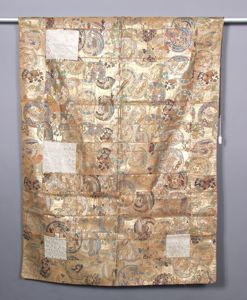 Medium
Two types of silk lampas, one with a red ground and the other white.
Object Description
This is a seven-column monkâs robe, more specifically known as an uttaraso, originally worn as the second and final layer over a five-column robe for religious ceremonies in the monastery. However, by the time this was made, kesa had long been worn over sleeved robes and other clothing, and so it was probably draped over the left shoulder as the outermost of many layers. The patchwork robe is cut from a double weave fabric with long untwisted brown silk threads forming most of the background and a pattern of roundels with various designs in shades of blue and green. No attempt was made to match up the design, creating a chaotic effect of fragmented roundels. The vertical and horizontal dividing columns and borders are of a heavy, intricately woven silk with a brown ground and designs in shades of cream, blue and green. Only near the wider central column, symbolizing the Buddha, does there seem to be any effort to align design elements. There are four corner patches and two shoulder patches in off-white silk with silver thread woven in, making a floral design. The lining is lightweight silk woven uniformly in brown and purple and having an iridescent quality. Some of the roundels are edged with a saw-blade, or flame pattern, containing a dragon. Other roundels are made of a phoenix with feathers at the edge, or a kirin with a circular body. All of these are traditional Chinese creatures, demonstrating the influence of Chinese fabrics on Japanese manufacturing, or possibly indicating a Chinese origin for the fabric or the robe itself. Designs such as peonies, pomegranates, and leaves intersect some of the roundels and add to the confusion of the cut up design. The four corner patches signifying the four Guardian Kings (Celestial Monarchs), and the two larger patches flanking the center column below the top border, are made from off-white silk having a floral design woven into it in silver thread. The even-looking vine and flower pattern looks as if the fabric may have come from, or been made for, Western markets. It is not typical of Asian designs we have encountered. -Patricia Yu, Pomona '08, August 2008.
For more information: Dusenbury, Mary M. Flowers, Dragons & Pine Trees: Asian Textiles in the Spencer Museum of Art. New York: Hudson Hills Press, 2004. Hibi, Sadao and Motoji Niwa. Snow, Wave, Pine: Traditional Patterns in Japanese Design.

Keywords Click a term to view the records with the same keyword
This object has the following keywords:
Liturgical garments, Textiles*
Additional Images Click an image to view a larger version