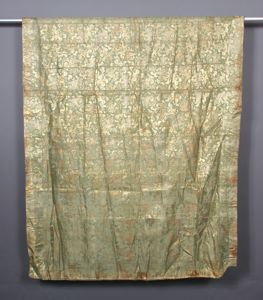 Medium
Brocaded green silk satin.
Object Description
Japanese Buddhist Monkâs robe made of green silk and gilt inlay. Cut from one piece of cloth and the patches sewn together in the ârice fieldâ format to create a seven columned, bordered kesa known as an uttaraso. Each column is comprised of two long and one short rectangular patch divided by short horizontal strips cut from the same fabric. Four small squares, also cut from the same cloth, are sewn to the four corners of the kesa. A pattern of alternating rows of paulownia leaves and phoenixes is woven over the plain weave in gold leaf gilded paper strips. The motif of paulownia and phoenixes comes from Chinese mythology that was later carried over to Japan. According to myth, when the phoenix alights on the paulownia tree, it heralds the rise of a new era under the rule of a virtuous emperor. The kesa is commonly worn draped over the left shoulder and under the right arm.

The ideal kesa is the funzo-e, literally meaning ârobe made of excrement,â and was supposed to be stitched together from discarded cloth scraps to form a patchwork design that represented the Buddhist monkâs vow of poverty. This idea of a pure garment forming out of impure origins parallels another Buddhist symbol, the lotus, which rises pure and white from the unclean mire. Kesa also serve an important function in the transmission of authority, where a master passes on his kesa to his disciple. As the influence of Buddhism in Japan steadily increased, monksâ robes grew more luxurious, and were cut from handsome pieces of cloth donated by followers or purchased with the money donated by patrons. In keeping with the original concept of the kesa, however, even the most costly of robes was arranged in a patchwork pattern, where the original bolt of cloth was cut into rectangular patches and strips and re-sewn together; uncut kesa were viewed unfavorably. The four smaller, square patches in the corners represented the Shittenno, the Four Celestial Monarchs, also known as the Four Guardian Kings. They guarded just and virtuous rulers, protected the state, upheld Buddhist law, and stood sentinel at the four cardinal points of the universe.