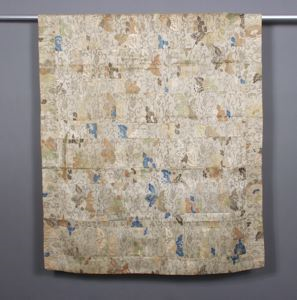 Medium
Brocaded silk gauze.
Object Description
A nine-columned, rectangular Buddhist monkâs mantle (kesa) formed of pieced panels of fabric pattered with colorful inlaid flowers and vines on a white gauze ground that has now darkened with age into a light brown. Small, square patches cut from the same fabric are at the four corners of the robe and above the left shoulder.

The weave is an interesting variation on gauze: where standard gauze contains intertwining warps in a miniscule leno lace pattern, this robe was woven entirely without twisting the warps at all, creating a pattern that feels like a mix between gauze and plain weave. The flowers are blooming magnolias with huge seedpods and chrysanthemums. The designs are created via thick, untwisted lengths of silk inlaid into the wefts of the gauze. The vines are created from inlaid gilt paper wefts, a delicate yet quite visible touch. Under a 20-power microscope, the gauze is revealed to be sloppily woven, with inconsistencies throughout the garment; the flower inlays are also irregular.

The ideal kesa is the funzo-e, literally meaning ârobe made of excrement,â and was supposed to be stitched together from discarded cloth scraps to form a patchwork design that represented the Buddhist monkâs vow of poverty. This idea of a pure garment forming out of impure origins parallels another Buddhist symbol, the lotus, which rises pure and white from the unclean mire. Kesa also serve an important function in the transmission of authority, where a master passes on his kesa to his disciple. As the influence of Buddhism in Japan steadily increased, monksâ robes grew more luxurious, and were cut from handsome pieces of cloth donated by followers or purchased with the money donated by patrons. In keeping with the original concept of the kesa, however, even the most costly of robes was arranged in a patchwork pattern, where the original bolt of cloth was cut into rectangular patches and strips and re-sewn together; uncut kesa were viewed unfavorably. The kesa is commonly worn draped over the left shoulder and under the right arm.