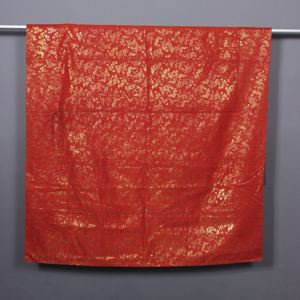 Medium
Red and gold silk lampas.
Object Description
A Buddhist monkâs seven-columned kesa, also known as uttaraso, pieced together with red panels cut from a single bolt of silk brocade. The kesa is decorated in a pattern of phoenixes and clouds, all done in gold wrapped flat paper that is woven into the kesa. There is also one decorative red cord tassel on the front. The back of the kesa is lined in an iridescent blue-purple silk. Also on the back is a loop that is poorly re-stitched that would have been used to fasten the kesa during wear.

This seven columned kesa would have been layered over a smaller five columned kesa for religious gatherings within the monastery. The phoenix (ho-o) has long been associated with Buddhism, especially with the Pure Land Sect (Jodo-shu), as an auspicious symbol. The body of the kesa also contains a subtle design of a swastika-fret (manji) grid pattern, similar to patterns seen in Chinese robes. Manji are used throughout Asia to indicate places where the Buddha is worshipped, and thus the pattern is eminently appropriate for a monkâs robe. Furthermore, the Japanese used the swastika emblem to represent Buddhist temples or holy sites, so the swastika is also appropriate because it would have been worn by a monk during temple ceremonies.