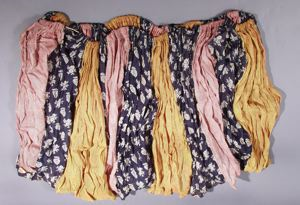 Commentary
The ghagra is a kind of paneled skirt, typical to Rajasthan since the Mughal Empire. Though they can sometimes use up to twenty yards of material, ghagras are gathered tightly around the waist to create a dramatic flare around the ankles. It may seem that such a dramatic garment could only be used by the rich, or at festivals, but the ghagra has traditionally been an all-purpose garment, with variations suitable for any occasion from working in the fields to attending a wedding. The ghagra in the Scripps collection is a fairly typical, but nonetheless interesting, example of ghagras from the first half of the twentieth centuryâa crucial period in the evolution of Indian textile traditions. Where Britain had once manufactured raw Indian cotton for export back into the Indian market, a depression in the Lancashire cotton industry following World War I spurred Indian industrialists to harness western production methods in a bid to take back their domestic textile market. Furthermore, it was during this period that Gandhi was advocating a revival of Indian handicrafts and design, for textiles in particular, as part of the Non-Cooperation Movement. Scrippsâs ghagra is interesting because it shows how indifferently everyday craftspeople might have encountered the highly politicized evolutions in the Indian textile industry--seeing no conflict in using industrially-produced fabric that merely mimics age-old processes, in incorporating English designs into traditional fashions, and in using western sewing machines to craft a classically Indian garment.

Keeping in mind the aforementioned depression in the English cotton industry, it seems likely that the fabrics in Scrippsâs ghagra were manufactured in India itself. We can tell that the ghagra in the Scripps collection is made from industrially-produced and printed fabric because its fabrics lack the irregularities that define and beautify hand done textile work. All three fabrics used in the skirt, however, mimic hand dying processes. Its striped fabrics, for example, are industrially printed imitations of traditional tie dying. The blue-and-white fabric simulates indigo resist-dyed calicos, yet incorporates a distinctly British influence even as it replicates a traditional Indian technique. Indeed, the fabric is printed with alternating paan, or stylized betel leaf motifs, and loose sprays of what appear to be English wildflowers. Ultimately, the blue-and-white fabric is a classic example of east-meets-west design, and of a continuing British influence on Indian design even during a resurgence of Indian textile production.

The skirt is approximately nine yards wide, a median range width for a ghagra. While it is difficult to base an assumption about the wearerâs status on the ghagraâs width, we know that it must have belonged to someone who could afford to use nine yards of fabric on a single garment. Furthermore, some of the skirtâs seams are machine sewn, indicating that the wearer either had access to a sewing machine herself, or had the means to send her sewing out. As the ghagra is fairly plain however, with neither mirrors, nor bells, nor embroidery to ornament it, we can assume that this skirt was intended for everyday wear, an assumption supported by the fact that the skirtâs front seam has been left open for greater mobility. We can learn the most about the skirtâs wearer from the double band of piping sewn to its bottom hem. This piping, a wide band of light fabric with a second band of saffron, is a traditional way of indicating that the wearer is a married woman. Apparently the ghagraâs maker, like many members of the Non-Cooperation movement itself, saw little conflict in using select western techniques, like machine sewing, to perpetuate traditional Indian fashions.

The incorporation of machine-made imitations of handmade cloth; both traditional design and Western technique; and a mix of British textile motifs with Indian status indicators in this ghagra, seem to prove that everyday craftspeople took their eraâs historic changes in stride. It appears that the person who made the skirt was indifferent to the apparently contradicting ideologies in his or her work, and not a die-hard supporter of either Gandhiâs handicraft revival, or of western-style Indian industry. Indeed, the skirt seems to prove that these seemingly incompatible production philosophies would have blurred and intermingled in real life. Furthermore, the skirtâs use of machine sewing and industrial fabrics associates it with its periodâs larger questioning of the role of machines in handicraft. Ultimately, Scrippsâs ghagra is a fascinating piece because it embodies the ways many craftspeople might have experienced a rapidly changing textile industry, and indeed a changing India.


Medium
Tie-dyed and stencil-resist patterns on cotton.
Object Description
Very wide tubular form with a header and draw string made of panels of three types of tie-dyed and stencil-dyed cotton. Handsewn hems; alternating panels tacked together by hand and reinforced by machine.

Possibly a dance costume.
Keywords Click a term to view the records with the same keyword
This object has the following keywords:
Skirts, Textiles*

Your current search criteria is: Objects is "Skirt (ghagra)".