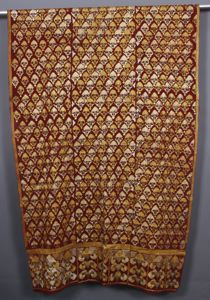 Commentary
The headscarf is a typical example of phulkari embroidery, an ancient folk art from Punjab. Historically, Punjab has been home to many Muslims, and today, the state sits on the Pakistani border. It is not surprising then, that Punjabâs phulkari embroidery is deeply influenced by an Islamic aesthetic of abstraction. Phulkaris are typically covered in geometrized renderings of crops, flowers, and everyday objects such as cooking utensils. Each motif is rendered with extreme precision, with the craftswoman treating the warp and weft of her background cloth as a minuscule grid. When a phulkari is so densely embroidered that very little of the original ground is visible, it is called a bagh, which means garden. T581 is a good example of a bagh, which were usually used at celebrations and ceremonies.

As phulkari is essentially a cottage industry, it is nearly always worked on khaddar, or homespun fabric, which is woven on narrow looms. To create a large piece, such as this headscarf, several loom widths of fabric would be stitched together. In Western Punjab, loom widths are first embroidered, and then stitched together to make a whole. As the pattern in this piece does not quite match up across the seams, it may be a Western Punjabi piece.

Phulkari has always been a womanâs craft. Women of all ages would gather to embroider together. Young girls would begin embroidering their trousseaus from a very early age, and married women would craft pieces for their homes, for ceremonies, for gifts, and for their daughtersâ trousseaus. Phulkari has rarely been made for the market, and much love and care must have gone into stitching these heirlooms. As this piece is red, an auspicious color for weddings, it could well have been made in association with a wedding, whether as part of the brideâs costume, or as a gift presented to the bride or groomâs family. Phulkari would once have had a central role in many Punjabi womenâs lives. Today, as these women gain access to new opportunities, like education and employment, phulkari is becoming lostâa bittersweet ending for this masterful craft.

For more examples of phulkari embroidery, please see T581.
Keywords Click a term to view the records with the same keyword
This object has the following keywords:
Scarves and shawls, Textiles*
Additional Images Click an image to view a larger version

Your current search criteria is: Objects is "Woman's Head Covering".