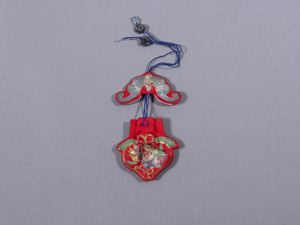 Commentary
Sachet, 1890-1910 (T198) from the Scripps College Permanent Collection is a red silk Qing Dynasty scented sachet. The bag is constructed in a peach shape and decorated with bat, floral, and peach motifs. The embroidered design on Sachet uses metallic thread in a couching stitch on a silk background. 1 The iconography of this particular Chinese scented sachet suggests that it was created and worn by a girl.
Chinese scented sachets are both useful and ornamental. The small bags are stuffed with aromatic herbs such as bay leaf, thyme, parsley stems, and black peppercorns.2 They are made in a variety of shapes and sizes, and adorned with elaborate patterns. These highly decorative bags are worn on the front of the dress by both men and women. The scented sachets are traditionally used for absorbing sweat, repelling insects, and warding off evils. The auspicious symbols on the pouches are used to avoid evil and disaster while bringing good luck and happiness to the wearer.
The use of the scent bags has changed throughout their long history. The scented sachet first appeared in an ancient Chinese medical text from 2300 BC. As described in the text, the bag contained herbs meant to prevent plague and snake venom. During the Han Dynasty (206 BC-220 AD), it became customary for young boys and girls to wear the scented sachets on their person. Throughout both the Tang (618-907 AD) and Song dynasties (960-1279 AD), the pouches were worn uniquely by women while men wore small bags that held little objects.3 In the Qing Dynasty (1644-1912) the scent pouches became a sort of love token sent by a girl to someone she had fallen in love with. Today, the pouches are traditional accessories worn for the Dragon Boat Festival.4 Although the scented sachets are no longer used to ward off evils or cure illnesses, they still retain an instrumental cultural value and are appreciated for their decorative beauty.5
The construction of the small scented pouch from the Scripps College collection is representative of the textile industry during the Qing dynasty. Sachet is made of red silk and embroidered with metallic thread. During the Qing Dynasty the silk industry was controlled and regulated by the government, from production to export. At this time, red fabrics were made both from natural dyes and chemical dyes. The natural reds were extracted from safflower, madder roots, and the inner bark of sapwood trees. Because of the time and money that went into creating these reds they were reserved only for the highest ranking officials. While it is possible that the red silk of this pouch was made from a natural red dye, the vibrancy and consistent nature of the color suggests that it was colored from a chemical dye. The beautiful embroidery decoration that covers the small pouch is made from metallic thread couched onto the silk. Metallic thread was incredibly popular at this time in China and admired across the world. The threads are created by âadhering metallic leaf to a sheet of paper, burnishing the leaf, cutting the paper into thin strips, inserting strips directly into the web or winding them around strands of silk thread.â6 In less costly garments, like Sachet, the foil is wrapped more loosely and made from alloys of a variety of metals rather than pure gold or pure silver.
Sachet has very strong iconography associated with the embroidered motifs. Firstly, the red of the silk is associated with fortune, joy, and happiness. The peach, both found in the shape of the pouch and in the embroidery, is a symbol of longevity, fertility, and happiness. The peachâs importance stems from the legend of the miraculous peach trees that grew deep in the Kunlun Mountains in the garden of the Queen Mother of the West. These Peaches of Immortality ripened only once every thousand years and conferred immortality on any creature that ate them.7 Although sometimes the peach appears in a trifold motif, in Sachet there is just one peach embroidered as an outline surrounding ambiguous floral motifs. The peachâs association with fertility imply that this particular sachet was used by a girl. The bat, or pianfu, is a symbol deriving its primary meaning as a rebus for fu. The Chinese word fu means blessings, happiness, or good fortune. Although red bats are particularly felicitous, as red is a homophone for majestic or sublime and used to ward off demons, other colors hold similarly auspicious meanings. The upside down orientation of the bat at the top of the pouch means âhappiness has arrived.â The blessing nature and happy associations of the bat on Sachet indicate that it was for a young women, perhaps someone who was recently with child or hoping to conceive. Although traditionally given by a girl to her lover during the Qing dynasty, the particular motifs on Sachet indicate that this scented sachet was actually worn by a girl.
Scent sachets are deeply rooted in Chinese history and tradition. Sachet from the Scripps College permanent collection is an example of a Qing dynasty scented sachet worn by a young woman.


Medium
Couching on red satin.
Object Description
Red satin sachet of a peach shape with bat and peach embroidery.
Keywords Click a term to view the records with the same keyword
This object has the following keywords:
Accessories, Textiles

Your current search criteria is: Objects is "Sachet".