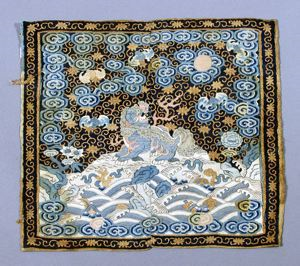 Medium
Kesi silk.
Object Description
Square insignia badge, also known as a rank badge or a mandarin square, with a lion to indicate a military official of the second rank. The badge is woven entirely using tapestry weave (kesi); even the gold thread that forms the ornamental border and the lotus flower background is woven into the support. The lion stands on a single rock rising out of the sea, its body aligned left to right with red flames rising from it, but its head turns back to gaze at the red sun disk in the upper right corner, which can either be representative of a subject gazing at his emperor, or expressive of the desire to âAim at the sun and rise high.â A lion can be differentiated from the bear by its tightly curling mane and tail. Five bats fly overhead, four blue and one pink-red. The Chinese word for bat is homophonous with the word for happiness, so bats represent happiness, and a red bat in the sky represents âhappiness as vast as the sky.â To the right, a single peony blossom blooms, symbolizing hopes for greatness, wealth, and advancement. The narcissus flowers on the left symbolize honesty and good fortune, and the lingzhi fungi growing next to it symbolize longevity and immortality. Lotus flowers in the background and repeated again in the border are Buddhist symbols of purity. More auspicious symbols are present in the waves, including the Bamboo Lute and Rods of Zhang Guolao, one of the Eight Daoist Immortals.

The shape of the square badges symbolized the earth, and the officialsâ earthly duties. Qing officials wore their badges on the front and back of their surcoats (bufu), and the front badge was split vertically down the middle to accommodate the vertical opening in the surcoat. In this particular lion badge of the second rank military official, the two halves have been sewn together. The surcoats were purposefully dark and somber to draw attention to the wearerâs rank and station during formal court functions. During such functions, the military official always stood to the right of the emperor, and so the animal on his badge looks left, towards the emperor. The officialâs wife, however, wore the mirror image of her husbandâs badge, so that in formal sittings, where she is on his right, the animalsâ bodies are aligned toward each other, even if the lionâs face is directed away.


Keywords Click a term to view the records with the same keyword
This object has the following keywords:
Insignia Badge, Textiles
Additional Images Click an image to view a larger version