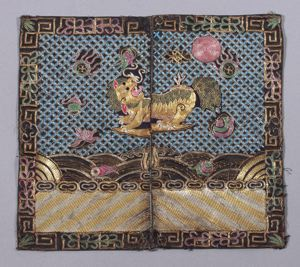 Medium
Couching stitch on black satin.
Object Description
Square insignia badge, also known as a rank badge or a mandarin square, with an applied bear for a fifth rank military official. The bear stands on a single rock rising out of the sea against a blue sky, its head turned back to look towards the red sun disk, in the upper right. The sun disk either represented the emperor or the desire to âaim at the sun and rise high.â

The Buddhist Eight Precious Things surround the bear; starting from the bottom left and moving clockwise they are the fish (abundance), the lotus (purity), the vase (purity, immortality, or peace), the wheel of law (continual transmigration of souls), the parasol (integrity or government), the endless knot (Buddhaâs undying love or long life), wheel of law (repeated), the canopy (protection), and the conch shell (call to worship).

Straight diagonal lines form the slanted lishui wave pattern and half circular waves comprise the lower half of the badge. An ornamental border, popularized in the Qing, surrounds the badge. Couched gold and silver metallic threads dominate the embroidery, with satin stitches uses from the blue sky and the bearâs eyes, ears, and tongue. Polychrome silk yarn thread was used to couch some of the metallic thread in place, giving purple, green, and red tones to the gold and silver. âMade in Chinaâ stamped in blue ink in the upper right corner on the reverse side, an indication that this badge was on the market to be sold to Western collectors.


The shape of the square badges symbolized the earth, and the officialsâ earthly duties. Qing officials wore their badges on the front and back of their surcoats (bufu), and the front badge was split vertically down the middle to accommodate the vertical opening in the surcoat. In this particular bear badge of the fifth rank military official, the two halves have been sewn together.

The surcoats were purposefully dark and somber to draw attention to the wearerâs rank and station during formal court functions. During such functions, the military official always stood to the right of the emperor, and so the animal on his badge looks left, towards the emperor. The officialâs wife, however, wore the mirror image of her husbandâs badge, so that in formal sittings, where she is on his right, the animalsâ bodies are aligned toward each other, even if the animalâs face is directed away.


Keywords Click a term to view the records with the same keyword
This object has the following keywords:
Insignia Badge, Textiles
Additional Images Click an image to view a larger version