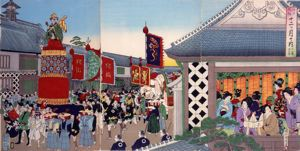 Credit Line: Purchased with funds from the Aoki Endowment for Japanese Arts and Cultures
Accession Number: 2001.2.111

Marks
Signed: âYoshu Chikanobu hitsuâ
Medium
Colored ink woodblock triptych on off-white paper. Oban triptych.
Object Description
A grand summer festival with a parade of palanquins and floats was staged on the 15th day of the 6th month to celebrate the Mountain Deity (Sanno) of Hie Shrine who had protected Edo Castle since 1478. Ota Dokan (1432-86), the military governor of Kawagoe, originally erected a Shinto shrine inside his new fortress near the bay. When the military compound was taken over by the Tokugawa family in 1590, they moved the shrine buildings in 1607 to a site in Koji-machi outside the castle and opened it to public worship. During the Edo Period the 3-day Sanno Matsuri was one of the three great festivals of Japan (alternating annually with celebrations at the Kanda Myojin Shrine) and included thousand of local participants who accompanied the three sacred palanquins and more than 45 festival carts through the town and parts of Edo Castle, where the shogun himself observed the festivities from a specially built platform.

In this print two floats are carried down a shop lined street. The statue of a monkey atop the left festival cart is dressed in elaborate silk brocade robes and a golden crown. He carries cluster of sacred suzu bells and a baton with special paper gohei strips. The monkey was considered a messenger of the Hie deities, whose main shrine site was on Mt. Hie northeast of the imperial capital of Kyoto. Three men in grey formal shrine attire, with large flat hats, kataginu jackets and hakama coulottes, escort the festival cart. In the center of the print is an elephant float (moved by men walking inside the elephant legs) accompanied by musicians and local parishioners dressed in exotic Korean style costumes. At right a group of merchant wives and daughters watch the parade and party from the second floor residence of the family shop.


Publisher
Yokoyama Ryohachi
Keywords Click a term to view the records with the same keyword
This object has the following keywords:
1886-1890, Festivals and Games, Processions
Additional Images Click an image to view a larger version

Your current search criteria is: Keyword is "PA".