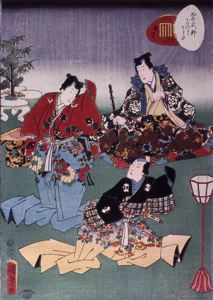 Credit Line: Purchased with funds from the Aoki Endowment for Japanese Arts and Cultures
Accession Number: 2001.2.77

Edition
Very good impression with gauffrage and a lacquer pattern on the black kimono. Strong woodgrain is visible in the background.
Marks
There is a Genji seal with text within and an oval seal with text in the upper right. A red text banner, two oval seals, and one leaf-shaped seal are in the lower left. There is text printed on the backing paper.
Medium
Colored ink woodblock print on off-white paper. Oban tate-e.
Object Description
Edo period color woodblock print depicting two actors dancing in the foreground, while an actor seated and holding a flute is in the background.

Genjiâs son Yugiri is featured in the chapter âYokobue / The Fluteâ when he is given custody of his best friendâs musical instrument. Kashiwagi has just died of shame for having cuckolded Genji, and Yugiri not only takes care of Kashiwagiâs prized flute but also his widow.


Publisher
Tsutaya Kichizo.
Keywords Click a term to view the records with the same keyword
This object has the following keywords:
1841-1868, Actors and Actresses, Genji, Music and Dancing
Additional Images Click an image to view a larger version