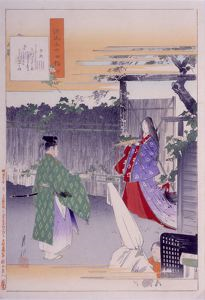 Credit Line: Purchased with funds from the Aoki Endowment for Japanese Arts and Cultures
Accession Number: 2001.2.54

Marks
There is a seal in the lower left of the print, and a text box and signature in an orange box in the upper left. Orange text is printed in the lower left border.
Medium
Colored ink woodblock on off-white paper. Oban tate-e.
Object Description
Meiji period color woodblock print depicting a scene from the "Tales of Genji." Gekko has depicted his figures in traditional 10th century court dress and provided a historically accurate rendering of the architectural setting. The artist was part of an early 20th century movement to revive Japanese traditional arts, and such attention to detail presents a very different image of the romantic exchange from Kunisada's version at left. The delicate lines and pale colors were part of this "classic revival" and in clear contrast to the thicker lines and brighter colors of 19th century prints. In the white cartouche at left, Gekko has included the famous poem Genji sent to Yugao:

I think I need not ask whose face it is,
So bright, this evening face, in the shining dew.


Keywords Click a term to view the records with the same keyword
This object has the following keywords:
1891-1912, Genji
Portfolio List Click a portfolio name to view all the objects in that portfolio
This object is a member of the following portfolios:

Your current search criteria is: Objects is "Four: The Twilight Beauty (Yon: Yugao)".