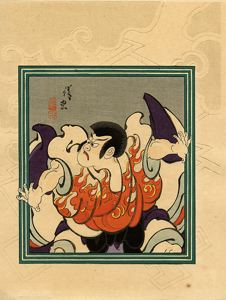 Credit Line: Purchased with funds from the Aoki Endowment for Japanese Arts and Cultures
Accession Number: 2001.2.52

In the play entitled Narukami, a Buddist monk named Narukami is furious at the emperor, captures the rain-causing dragon, and causes a terrible drought. The frightened emperor sends a beautiful princess, Kumo no Taema, to seduce Narukami. Her mission is a success, and she frees the dragon before escaping herself. When Narukami wakes up he finds the princess gone and rain falling. He becomes furious and vows vengeance.

This print, along with 2001.2.25, show Narukami in his full fury, shortly after awakening. His violent wrath is vividly depicted as he bursts out of the print. Tadamasa based his large print on Kiyotadaâs small 1938 print, which in turn copies an early 17th century image of Ichikawa Danjuro playing Narukami.


Keywords Click a term to view the records with the same keyword
This object has the following keywords:
Actors and Actresses, Kabuki, Showa Period
Additional Images Click an image to view a larger version