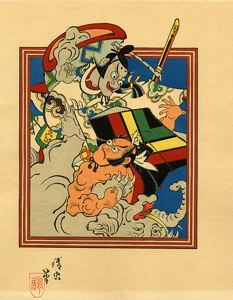 Danjuro IX plays the strongman Yamanoue Gennaizaemon (below) who tries to wrest control of an elephant from Prince Suzuka. The exotic animal had been sent from India to the Imperial Palace in Kyoto, but had escaped into the mountains. The play was first performed in 1701 by Danjuro I to highlight his great strength and exaggerated acting style. The original text has been lost, and the play has seldom been performed.


Marks
Signed: 'Kiyotada' with red 'Torii' seal.
Medium
Colored ink woodblock print on off-white paper. Chuban tate-e.
Object Description
Showa period color woodblock print depicting the actor Ichikawa Danjuro in the act of subduing an elephant. In Zouhiki, the hero Iruka and the villain Gennaizaemon have a tug-of-war using an elephant instead of a rope. After Iruka wins, he celebrates by dragging and flinging the elephant around in a display of strength and power.

This play introduced an exotic aspect to kabuki, as elephants were not native to Japan, and in fact, only three elephants are known to have been brought there before the 19th century.
Keywords Click a term to view the records with the same keyword
This object has the following keywords:
Actors and Actresses, Kabuki, Showa Period
Additional Images Click an image to view a larger version