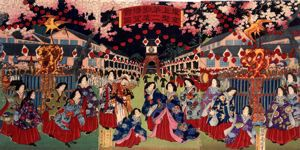 Credit Line: Purchased with funds from the Aoki Endowment for Japanese Arts and Cultures
Accession Number: 2001.2.28

Edition
Late impression.
Marks
Signed: âYoshu Chikanobu hitsuâ without seals
Medium
Colored ink woodblock on off-white paper. Oban triptych.
Object Description
The emperor and court ladies stand between two fountains that flank the entry into the Ueno Park compound housing the Second National Industrial Exhibition that was open to the public from 01 March to 30 June 1881. Such fairs followed European and American examples where the newest manufactures from Japan and abroad could be displayed. Musical entertainment was provided by a military band, another imported innovation. A large clock tower spans the road that leads to the grand plaza and main exhibition halls. The time is almost 8pm, and the visitors are enjoying a night viewing of cherry blossoms.

This area of Ueno Park has long been noted for its spectacular cherry trees, some of which may date back to when this was part of Kan'ei-ji, a Buddhist mortuary temple complex in honor of the Tokugawa shoguns. Following the abdication of the last shogun in 1868, Tokugawa loyalists fought imperial army forces at Ueno. Chikanobu was among those samurai who were surrounded by the new government's troops, and although many loyalists were massacred, Chikanobu was captured, released and fled to northern Japan. Thus, one might imagine the emotions he felt when depicting the site of such tragic events. In 1873 the hilltop was designated a public park and in 1877 was the site of the First National Industrial Exhibition which attracted nearly a half million visitors.

The 1881 Ueno exposition was even larger, and featured a two-story brick building designed by the British architect Josiah Conder (1852-1920), which later became a national art museum under imperial sponsorship. The fountains shown in the print appear to be of gilt cast bronze and have two tiers of basins supported by dragons, above which are rocky forms surmounted by cranes. Water for these fountains was pumped uphill from the Shinobazu Pond, an early example of modern hydraulics in Tokyo. The exhibition buildings that line the roadway feature large expanses of plate glass windows, and lampposts flank the scene, giving a very modern look to this exposition complex. Chikanobu designed a number of prints showing the Second National Industrial Exhibition, many of which were bird's eye views of the whole compound or panoramas of the grand plaza area.


Publisher
Asano Eizo
Keywords Click a term to view the records with the same keyword
This object has the following keywords:
1880-1885, Aristocrats and Public Officials, Groups
Additional Images Click an image to view a larger version