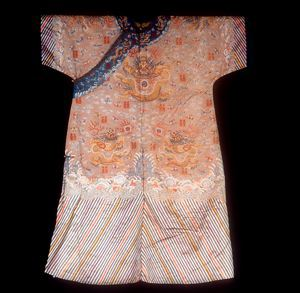 Marks
No marks.
Medium
Embroidered orange gauze coat with black silk sleeves and a yellow silk lining.
Object Description
A Manchu manâs semi-formal court robe. Full length garment with front overlap closing to the right fastened with 5 gilt metal ball-and-loop toggle buttons. Tapered sleeves ending with flared cuffs. Slits on the sides, front and back of the garment. The body of the jifu contains the imperial imagery of nine golden dragons, flaming pearls, many shuang-xi symbols of double happiness and a celestial landscape of clouds and bats. A swastika-fret grid pattern with a scattered scheme of multicolored bats is used across the surface of the robe and acts as a backdrop for the important imperial and auspicious imagery. The borders of the collar and cuffs are on black gauze with a blue embroidered background decorated with dragons, waves, clouds, bats and the shuang-xi symbol. The sleeve band and cuff edgings are made of black silk and gold metallic brocade. The hem of the jifu contains multicolored mountains and long multicolored stylized waves all done in Florentine stitch. The orange color of the jifu and the use of imperial symbols indicate that this robe was most likely intended for the crown prince. The dragon is one of the imperial symbols that are closely associated with the emperor. Only members of the royal family were allowed to wear nine dragons, although this rule was rarely enforced in the late Qing. On this jifu, the nine dragons are ornately depicted playing with flaming pearls, and the dragons are embroidered in gold and metallic couching. The flames around the pearl symbolically conjure lightning and thunder which reflect the power of the dragon and the emperor. Also, four of the Twelve Symbols of Authority are positioned symmetrically around the neckband. On the right side of the neckband is the moon and on the left side is the sun with a rooster; sun and moon are embroidered in long and short stitching. On the front of the jifu below the neckband is an embroidered constellation, and on the backside, a green and blue embroidered mountain. Made of gauze, this robe was probably worn during the hot summer months. The shuang-xi symbol of double happiness appears primarily on wedding attire to express wishes of future happiness for the bride and groom. The prominent placement of so many shuang-xi symbols on this jifu points to the possibility that the robe was used in a wedding ceremony by the Guangxu Emperor.
Written by Patricia Yu (Pomona â09), Getty Summer Intern, in August 2008.
For More Information: Dusenbury, Mary M. Flowers, Dragons & Pine Trees: Asian Textiles in the Spencer Museum of Art. New York: Hudson Hills Press, 2004. Jacobsen, Robert D. Imperial Silks: Châing Dynasty Textiles in the Minneapolis Institute of Arts. Volume 1. Minneapolis: Minneapolis Institute of Art, 2000.


Keywords Click a term to view the records with the same keyword
This object has the following keywords:
Robes, Textiles
Additional Images Click an image to view a larger version

Your current search criteria is: Objects is "Male Jifu for Heir Apparent".