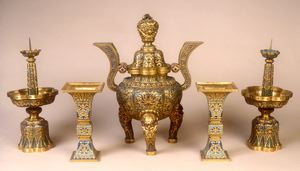 Marks
"00.1547" written on the interior of the base; no other marks.
Medium
Multicolored enamels and mother-of-pearl inlays on gilded bronze.
Object Description
Chinese cloisonnÃ© pricket candlestick with six-lobed bell-shaped base with one large and one small six-lobed drip pan. The bronze body has been cast or hammered to produce sunken cells into which the enamel and mother-of-pearl was filled to create a design of scrolling lotuses. Unlike the smooth, polished finish of most Chinese cloisonnÃ©, the gilt ground has been left unenamelled and the enamel in the sunken cells is sometimes left below the level of the cell or built up to rise above the cell walls. This raised effect uses colored enamels to imitate works set with semi-precious stones, such as lapis lazuli or turquoise. The edges are chased in a key-fret border and the interior of the small drip pan is enameled in turquoise blue.

This candlestick is one of a pair of candlesticks in a five-piece altar set that also includes an incense burner and a pair of fangzun beakers (73.3.3a-c, e).

One of the candlesticks from this set is featured on page 60 of Ogita and Pettersonâs Asian Cloisonne Enamels (1975). They write: âThe Chinese ceremonial candle, supported by a candlestick such as this one, has a large wick made of a hollow reed which has been wrapped with cotton string. The candlestick holds this candle very securely by means of its ice-pick-like âpricket,â onto which the wick is forced. The hollow stem is strong, and just the right size to fit perfectly over the pricket stem.â

Your current search criteria is: Objects is "Chinese CloisonnÃ© Candlestick (part of a set of five altar objects)".