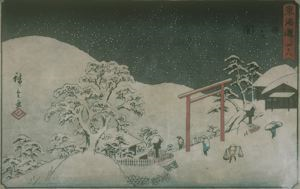 Commentary
Hiroshige (1797-1858) was best known for his work depicting landscapes, which had not become a major genre in Ukiyo-e subjects, and showed Japanâs rural and urban sides. He would depict the environment around the general population of Japan, going beyond the pleasure quarters to find his subjects and created very interesting foregrounds and backgrounds. Hiroshige was highly influenced by Japanâs distinct seasons, something that Japanese people are very proud of and was able to convey a sense of mood and atmosphere with each of his prints. Hiroshigeâs first major series was to depict famous views of Edo, present day Tokyo, in 1832. Born in Edo to a samurai family, Hiroshige was able to find 1,000 different views of Edo. After the success of that series Hiroshige went on a journey on the Tokaido, which was the âEastern Sea Routeâ that linked Edo and Kyoto. On the trip he sketched some of the fifty-three stations along the Tokaido and turned those into prints. These were popular among citizens who could not make the journey along the Tokaido themselves. Although he altered the reality of the environment in some of his compositions, Hiroshige was able to successfully evoke the essence of the location. To him it was more about fitting the mood and atmosphere of a place rather than the accuracy and realism. Hiroshige chose lyricism over realism.
This print is of the station at Seki, station number 48 out of 53 along the Tokaido. It is snowing and there are individual travelers passing through a gate. Hiroshige creates a sense of silence. Viewers can see the heaviness of the snow by the way Hiroshige piles it on the top of the roofs, fences and trees, along with on the backs of the travelers. Their feet are buried in the snow, so deep that their footsteps arenât imprinted but rather are immediately recovered by snow after each step. The struggle to walk for these travelers is seen through their hunched backs, especially for the water porter on the right, closest to the viewer.
The blue of their garments stands out against the white of the snow and the dark of the night sky. The windows of the buildings and the panes of, what seem to be, lanterns are a deeper blue, evoking a sense of frostiness to them. The red of the gate marks it as a significant landmark and is especially glorified in this somewhat empty place. The vastness of the space is shown with a mountain looming over the travelers and not much else in terms of buildings or people. These elements help with the feeling of loneliness and silence of the print. Hiroshige uses the white of the paper to create snowflakes falling in the night sky. His training in classical painting can be seen in the thickness of the trees. The thickness of the lines shows the trees as sturdy, especially as they continue to hold the weight of the increasing snowfall.
Typical of Hiroshige, this print transports the viewer into the space he depicts. In this case, the viewer canât help but feel cold, isolated and contemplative as they admire the silence of the snow around them.

Your current search criteria is: Objects is "Fifty-three Stations of the Tokaido: Station 48, Seki".