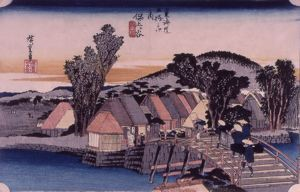 Located just over three miles from Kanagawa, Hodogaya is also included in what is now the city of Yokohama. Situated somewhat inland, this area, with it's rice fields, once had a rural feeling. The arched Shinmachi Bridge (New Town Bridge) Links the two town areas.
A kumuso (a lay Buddhist priest), his face hidden by a deep straw hat, and a palanquin carried by two bearers and attended by a Samurai official, cross the bridge toward the busier district. A large group of travelers approach the bridge from the opposite side. The street is lined with shops, restaurants, and houses. The first restaurant serves soba (buckwheat pasta), and its sign says "Ni-Hachi," indicating the ingredients of the soba: 20 percent whet flour and 80 percent buckwheat. It was also interpreted as the price for a bowl of of soba: 'two times eight,'----that is sixteen mon. This is inexpensive----the same price for which the prints of Hokusai and Hiroshige were sold.
(ref. âHokusai and Hiroshige,â p.166)


Publisher
Senkakudo.
Keywords Click a term to view the records with the same keyword
This object has the following keywords:
Hiroshige's Tokaido (c. 1833-1834), Tokaido Road, Japan
Portfolio List Click a portfolio name to view all the objects in that portfolio
This object is a member of the following portfolios:

Your current search criteria is: Objects is "Fifty-three Stations of the Tokaido: Station 5, Hodogaya".