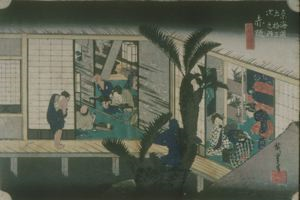 This print shows the interior of an inn in Akasaka, the only indoor scene in the Tokaido series. The three rooms are separated by sliding doors, and two of them open onto a small courtyard with sago palms. In the right-hand room, three women are making up their faces and hair. Behind the folding screen is a stack of futons. The man with the towel over his shoulders is returning from the bath via the open walkway. Inside his traveling companion reclines with his pipe, waiting for the blind masseur, who has just announced his arrival. The maid at his right prepares to serve dinner to the travelers.
Akasaka and its neighboring town, Goyu, were famous for their women who entertained travelers.
(ref. âHokusai and Hiroshige,â p. 200)

Your current search criteria is: Objects is "Fifty-three Stations of the Tokaido: Station 37, Akasaka".