One Hundred Famous Views of Edo: 101, Asakusa Rice Fields During the Cock ... 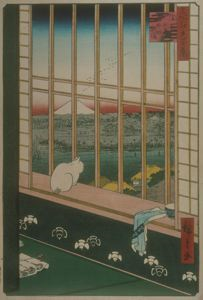 Commentary
The print's title is "Asakusa Rice Fields and the Torimachi Festival" (from the series â100 Famous Views of Edoâ, 1857âthis one in the Scripps College Collection), and it belongs to the tradition of ukiyo-e (âpictures of the floating worldâ) that depicted the pleasure quarters and kabuki theaters frequented by Japan's urban populace in the Edo period (1600â1868). In ukiyo-e, the cat is often cast as a voyeur in erotic scenes set in brothels, which were located near Asakusa. Here, from the second-story window of a brothel, the cat is looking down at a parade of revelers carrying large rakes as part of the Torimachi Festival. Several objects in the room connect the scene in the room with the outside view. On the floor at the left is a white packet containing rake-shaped hair ornamentsâa souvenir from the festival given by the male visitor who is apparently with his lover behind the folding screen, the edge of which is barely visible at the left. The towel and bowl of water on the windowsill suggest that the couple have perhaps finished their business. This is presumably why the cat looks outside, turning his back on them in boredom.

(Basil Stewart, p.175)
Publisher
Uoya Eikichi.
Keywords Click a term to view the records with the same keyword
This object has the following keywords:
1841-1868, Views of Edo, Japan
Portfolio List Click a portfolio name to view all the objects in that portfolio
This object is a member of the following portfolios:

Your current search criteria is: Objects is "One Hundred Famous Views of Edo: 101, Asakusa Rice Fields During the Cock ...".