Whirlpools and Waves at Naruto Province (No. 55) 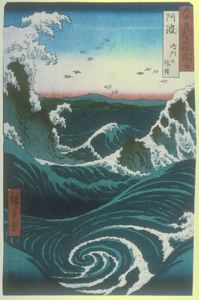 Commentary
Here, Hiroshige depicts the famous whirlpools in the Naruto Strait. The channel â located between Naruto in Tokushima (on Shikoku) and Awaji Island in HyÅgo Prefecture â connects Japanâs Inland Sea with the Pacific Ocean. Twice a day, the tide moves large amounts of water in and out of the Inland Sea through the narrow strait, causing water to rush through the channel reaching speeds of around 10 miles per hour and creating some of the worldâs strongest currents and spectacular whirlpools, known in Japanese asÂ uzushioÂ orÂ uzumaki. Though Hiroshige had never visited the Naruto Strait, he illustrated the whirlpools on more than one occasion. Here, he cleverly uses the white of the paper in the claw-like crests of the waves and the spiraling swirls of the whirlpool to express the waterâs immense energy and perhaps pay homage to Hokusaiâs iconic Great Wave.

âA masterpiece. A whirling eddy and waves breaking into foam over projecting rocks....The sea should be a deep blue, not green as is generally found.â (Basil Stewart)
Publisher
Koshimuraya Heisuke (c. 1853-1856).
Keywords Click a term to view the records with the same keyword
This object has the following keywords:
1841-1868, Coastal
Portfolio List Click a portfolio name to view all the objects in that portfolio
This object is a member of the following portfolios:

Your current search criteria is: Objects is "Whirlpools and Waves at Naruto Province (No. 55)".