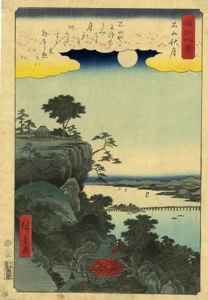 Commentary
This print of Ishiyama Temple and Lake Biwa is from Hiroshigeâs series Eight Views of Åmi Province (Åmi Hakkei), based on aÂ Chinese landscape series called the Eight Views of Xiaoxiang. These eight views were the subject of Chinese poems and paintings from the 11thÂ century, each with a specific theme: returning sails, descending geese, autumn moon, evening bells, evening glow, evening snow, evening rain, and clearing weather.Â From the 14th century, Japanese painters borrowed these Chinese scenes and by the 15th century had localized them into the Eight Views of Åmi (in Shiga Prefecture near Kyoto). The theme was first explored in woodblock prints by Harunobu in the 18th century and Hiroshige in the 19th century. Here, Hiroshige evokes Chinese landscape paintings in the rugged rocks of the mountainside and the pine tree barely clinging to the cliff.


Poem: âOh Hill of Stone, the image of the moon that thou seest appear on Niwo Sea, is it not more beautiful than even the moonlit Akashi, or Suma?'
Publisher
Uoya Eikichi (c. 1857).
Keywords Click a term to view the records with the same keyword
This object has the following keywords:
1841-1868, Autumn, Rural
Portfolio List Click a portfolio name to view all the objects in that portfolio
This object is a member of the following portfolios: