Clearing Weather after Snow at Shibaura 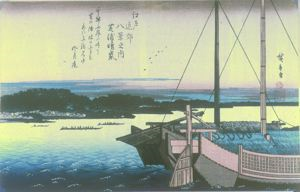 Commentary
The contemporary poet, Taihado, employed Hiroshige to depict a set of scenes chosen by him and some fellow poets, in order to record their poems, and some of the prints, have outside the border, the mark "Taihado-Kaihan" (prints inaugurated by Taihado). Each has a poem in three or four verses; and it is suggested that they were done for circulation among Taihado's coterie of poets - one of those little poetry clubs which form so pleasing a feature in the life of the ordinary folk of the period. The result was, however, so popular that the publisher obtained Taihado's permission to issue them in the ordinary way to the public, but with only one verse on each. (Strange, "The Colour prints of Hiroshige," Cassell & Co., London, n.d. p. 63).
Marks
Signed Hiroshige ga; hiroshige seal. Publisher's seal (Kikakudo).
Medium
Colored ink on paper; woodblock print; oban yoko-e.
Object Description
Ninteenth century Japanese color woodblock print depicting two large junks moored at a lake, and two other boats out in the stream. The sky is brightening after a storm.
Publisher
Kikakudo (c. 1835-1842).
Keywords Click a term to view the records with the same keyword
This object has the following keywords:
1821-1840, Boats, Coastal
Portfolio List Click a portfolio name to view all the objects in that portfolio
This object is a member of the following portfolios:

Your current search criteria is: Objects is "Clearing Weather after Snow at Shibaura".