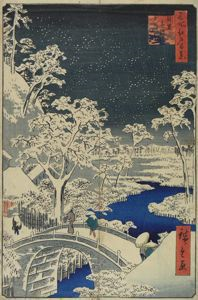 A subtle touch is added by the gray roof hidden in the lower right behind Hiroshige's signature. Â This would be known to his audience as the Shogatsuya, a teahouse beside the bridge that was famous for its shiruko mochi, a sweet bean-paste soup. Â Shogatsu means "new year," a hidden hint of the coming of spring that is echoed in the corner of green bokashi on the title cartouche.


Keywords Click a term to view the records with the same keyword
This object has the following keywords:
1841-1868, Views of Edo, Japan
Portfolio List Click a portfolio name to view all the objects in that portfolio
This object is a member of the following portfolios:

Your current search criteria is: Objects is "Drum Bridge and 'Setting Sun' Hill in Meguro".