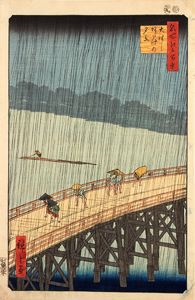 (A. Poster and H. Smith II, Hiroshige: One Hundred Famous Views of Edo, 1986)
Related Objects
Same image as accession number 2018, but much lighter (2019 exposed to acidic paper matting).
Keywords Click a term to view the records with the same keyword
This object has the following keywords:
1841-1868, Views of Edo, Japan
Portfolio List Click a portfolio name to view all the objects in that portfolio
This object is a member of the following portfolios:

Your current search criteria is: Objects is "Sudden Shower Over Shin-Ohashi Bridge at Atake".