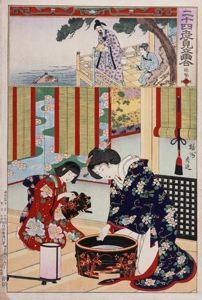 Credit Line: Purchased with funds from the Aoki Endowment for Japanese Arts and Cultures
Accession Number: 98.4.27

Commentary
Previously bound with accension numbers 98.4.1-98.4.43 in a book.
Marks
Signed: Yoshu Chikanobu. Carver: Hori Asa.
Medium
Color woodblock print.
Object Description
The upper panel illustrates a scene from the story of Huang Tingjian (J. Ko Teiken), one of the twenty-four paragons of filial piety. Although he was an accomplished poet and had attained high status as the Emperor's Chief Historian, he nonetheless personally attended to his mother. He even cleaned out his mother's chamber pot every night. He reasoned that since parents raised their children to adulthood, children should also care for their parents in their old age.

A verse in his honor reads,
"His noble virtue, known both far and near;
His life-long joy: service to his kin.
He never asked the hired staff to share
The jobs that rightly, filial sons should bear."

In the main panel, Chikanobu shows instead a scene of a daughter helping her mother fill a wash basin.


Provenance
Purchased in Japan by Professor Bruce Coates in 1998, with funds from the Aoki Endowment for Japanese Arts and Cultures.
Publisher
Hasegawa Hisaharu.
Keywords Click a term to view the records with the same keyword
This object has the following keywords:
1891-1912, Filial Piety
Additional Images Click an image to view a larger version

Your current search criteria is: Objects is "Tingjian (Teiken) Cleans his Mother's Chamberpot".