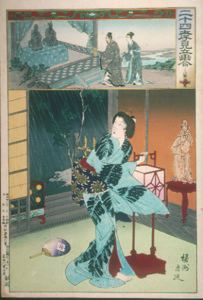 Credit Line: Purchased with funds from the Aoki Endowment for Japanese Arts and Cultures
Accession Number: 98.4.19

Commentary
Previously bound with accension numbers 98.4.1-98.4.43 in a book.
Marks
Signed: Yoshu Chikanobu. Carver: Hori Asa.
Medium
Color woodblock print.
Object Description
In this print series, Chikanobu uses the upper panel to introduce a scene from one of the Chinese stories regarding filial piety. Utilizing elements of the original story, he then reimagines a new scene and juxtaposes it to the original.

In this example of filial piety, Ding Lan (Teiran) had lost both of his parents at a young age, and never had the opportunity to serve them properly. In compensation, he commissioned a wood carver to make him two likenesses of his parents, which he then placed before the family altar. Twice a day, he would offer up incense, bow before the wooden statues and ask after their well-being. After marrying, he brought his wife along to do the same. The wife soon grew tired of the seemingly tedious ritual, and one day, she pricked the finger of one of the wooden statues as a joke. To her horror, a bead of blood welled up from the wooden finger! When Ding Lan came home, and noticed that the eyes of one of the statues was filled with tears, he knew what his wife had done and promptly divorced her for being unfilial.

A verse in his honor reads,
"Wooden statues of his parents,
Carved to look as if alive.
Pay heed, all good sons and daughters:
Serve your parents while you can!"

In the main panel, Chikanobu has replaced the wooden statues of Ding Lan's parents with a single wooden statue of the bodhisattva Kannon. A woman holding a lantern stands in the middle of the room while the winds blows her hair and rain lashes down outside.

Your current search criteria is: Objects is "Dinglan (Teiran) Honors his Ancestors".