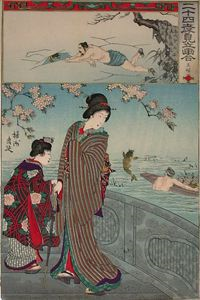 Credit Line: Purchased with funds from the Aoki Endowment for Japanese Arts and Cultures
Accession Number: 98.4.17

Commentary
Previously bound with accension numbers 98.4.1-98.4.43 in a book.
Marks
Signed: Yoshu Chikanobu. Carver: Hori Asa.
Medium
Color woodblock print.
Object Description
In the series "Juxtaposed Pictures of Twenty-Four Paragons of Filial Piety," Chikanobu introduces a scene from one of the Chinese stories in the upper panel, and then reimagines the scene using elements from the original story.

In this example of filial piety, Wang Xiang (Osho) goes out in wintertime to catch fresh fish for his ailing stepmother. Although his stepmother was very cruel to him, he nonetheless remained a dutiful son to her. The land was covered in ice and snow; where could anyone catch fish now? Sitting on the iced-over river in despair, he began to cry and his hot tears began to pool beneath him. Struck with an idea, he removed his coat and shirt and lay down on the ice. Soon, his body heat and tears melted a hole in the ice, and two fish leapt out of the crack. When his stepmother saw the fish, she repented of her former selfishness and completely changed her attitude towards her stepson.

A verse in his honor reads,
"Stepmothers abound on this earth,
But rare are sons like Lucky Wang.
Even now when the river freezes over,
We recall his icy sacrifice for Mother."

From the icy banks of a cold winter's day, Chikanobu takes the viewer into bright springtime, when the flowers are blooming overhead. A mother and her daughter watch a fisherman catch a fish leaping out of the water.