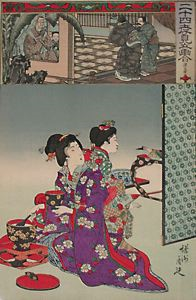 Credit Line: Purchased with funds from the Aoki Endowment for Japanese Arts and Cultures
Accession Number: 98.4.15

Commentary
Previously bound with accension numbers 98.4.1-98.4.43 in a book.
Marks
Signed: Yoshu Chikanobu.
Medium
Color woodblock print.
Object Description
In this series, Chikanobu illustrates a scene from the Twenty-four Paragons of Filial Piety in the upper panel and then uses elements of that story as inspiration for the main illustration.

In this example of filial piety, the second emperor of the Western Han dynasty, who earned the name Han Wendi, "The Learned Emperor of Han," takes care of his ailing mother. Though he was constantly addressing state business, he always found time to attend to his mother, even personally tasting her medicines to make sure they were not too hot or too cold before spoon-feeding them to her himself.

A verse in his honor reads:
"Both filial and humane, he was known throughout the land.
Awesome as a leader, he ruled the Hundred Kings.
For three long years he nursed his ailing mother, the Empress,
Duty-bound, he tasted every medicine she took."

In the main register, Chikanobu has used bright colors to show a mother and daughter spooning soup into bowls in preparation for the next meal.