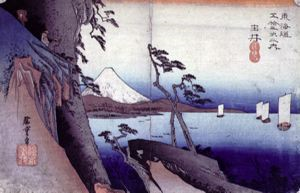 Marks
On verso in pencil, lower right: $20.00, Yui no. 17 3180. On mat in pencil: Yui Station 17, Satta Pass, 46.1.15, Jo XVI #17.
Medium
Nishiki-e, horizontal oban; colored ink on paper.
Object Description
Color woodblock print from Hiroshige's Tokaido Road series. A little more than 2 miles from Kambara steep mountains pushed the road toward the sea until it disappeared into the waves that lapped the foot of the cliff. Until the middle of the seventeenth century, travelers waited there for low tide, so they could walk around this obstacle. In 1655, in preparation for receiving members of a Korean mission, who were to travel to Edo, the Edo government cut a road into a mountainside here, the Satta Pass.

Hiroshige depicts the cliff of the pass at left and the strikingly beautiful Kiyomi Bay and its sailboats at the right. Snow-covered Mount Fuji rises near the center. Atop the cliff, two fearful travelers look toward the bay; one of them clings to the rocky face of the cliff. At this point, travelers leave the town of Yui and the sight of Fuji behind as they continue toward Edo, though the mountain can still be glimpsed.

The delicate gradation (bokashi) from the print's lower edge into the sea indicates that this print and others like it are of the earliest impression, while the gradation occurring from the horizon downward indicates a later impression. The omission of bokashi from the red in the rocks occurs in prints of still later impressions.


Publisher
Hoiedo (Takenouchi Magohachi) seal.
Keywords Click a term to view the records with the same keyword
This object has the following keywords:
Hiroshige's Tokaido (c. 1833-1834), Tokaido Road, Japan
Portfolio List Click a portfolio name to view all the objects in that portfolio
This object is a member of the following portfolios:

Your current search criteria is: Objects is "Fifty-three Stations of the Tokaido: Station 17, Yui".