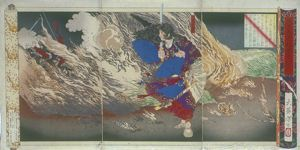 Commentary
Triptych; panels are matted together but not cojoined. Descriptive label on verso of mat.
Marks
On mat in pencil: Marer 57, Yoshitoshi. Text box with Japanese text printed in the upper right of the right panel. Signed: Taiso Yoshitoshi. Artist's seal: Taiso.
Medium
Colored ink woodblock on paper; oban; triptych.
Object Description
Meiji period Japanese color woodblock print with an image of a samurai surrounded by fire. Triptych. Yamato Takeru no mikoto was the third son of the 12th sovereign of Japan, Emperor Keiko, who reportedly reigned A.D. 71-130. Prince Yamato was sent by his father to chastise the uprising Kumaso tribes in Kyushu. He then subdued the Ezo tribes of northern Honshu. In this print, Prince Yamato carries a magic sword given by his aunt. His enemies set fire to high grass expecting him to die in the flames, but his sword cut through the inferno and his enemies perished instead. Prince Yamato is thought to be an embodiment of the heroic acts and courage of warriors who fought for the imperial court, and this image would have been doubly meaningful in the late 19th c. when imperial powers were restored.
Publisher
Yamanaka Kitaro.
Keywords Click a term to view the records with the same keyword
This object has the following keywords:
1880-1885, Royalty and Rulers
Additional Images Click an image to view a larger version