One Hundred Aspects of the Moon: No. 82, Kenshin in camp before battle 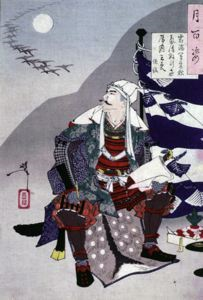 Commentary
Uesugi Kenshin before battle: Â The warlord Kenshin (1530-78) controlled much of central Japan, but only through constant battle with his neighbor. Â Seated outside a windbreak where other soldiers are dining, Kenshin is inspired to write: Â Frost fills the camp; the autumn air is still. Â Lines of geese cross the moon at 3 a.m.
Marks
On mat, in pencil: Marer 359. Artist's seal: Taiso. Description on verso of mat.
Medium
Colored ink woodblock on paper; oban.
Object Description
Meiji period Japanese color woodblock print with an image of Uesugi no Terutora (1530-1578), lord of Echigo province. He took Buddhist vows in 1552, shaving his head and taking the name Kenshin, but continued with his military pursuits.

Frost fills the camp and the autumn air is still
lines of returning geese cross sthe moon of the third hour.
-Kenshin

"Kenshin is shown in camp during one of his inconclusive campaigns abgainst Takeda Shengen (see also 93.3.51). The camp is suggested by the windbreak of white and indigo fabric behind him. Kenshin is resting his men before battle and has invited his generals to a banquet under the full moon. Dishes of formally arranged food are placed to his left. The third hour mentioned in the poem is the equivalent of midnight.

Kenshin sits on a stool covered with a spotted deerskin. He wears full armor, except that instead of a helmet he has the headdress of a priest over his shoulders and shaved head. The headdress is intricately embossed - this is no ordinary priest. Inspired to compose a poem by the sight of a flight of geese against a full moon, he holds a brush and writing paper. The poem, a couplet containing seven characters per line in the Chinese manner, conveys the peace of an autumn night. The background is simply but effectively suggested by the shadow of a hill and the silhouettes of the geese."


Publisher
Akiyama Buemon.
Keywords Click a term to view the records with the same keyword
This object has the following keywords:
1886-1890, Soldiers and Warriors
Additional Images Click an image to view a larger version

Your current search criteria is: Objects is "One Hundred Aspects of the Moon: No. 82, Kenshin in camp before battle ".