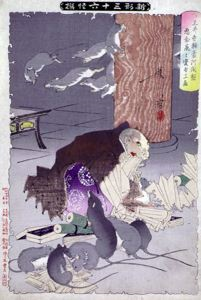 Commentary
As well as shapeshifting animals, Yoshitoshi also illustrated the supernatural transformation of humans consumed by their emotions. RaigÅ, an influential Buddhist priest at Miidera (Mii Temple) near Kyoto, served as spiritual adviser to Emperor Shirakawa (r. 1072â86), who came to him for help conceiving a male heir. When Prince Atsuhisa was born, the emperor was overjoyed and offered RaigÅ anything he wanted.Â RaigÅ requested permission to establish an ordination hall that would make his temple independent from other temples. Rival temples objected, forcing the emperor to renege on his offer. Infuriated, RaigÅ shut himself away and starved himself to death.Â Prince Atsuhisa died soon afterward, and RaigÅâs vengeful spirit changed into a thousand rats, which infested the temple and destroyed the emperorâs sacred books and scrolls. Here, RaigÅ himself is shown transformed into a large rat angrily gnawing his way through the sacred texts.

Note: XXV (p.68-9) of "Yoshitoshi's Thirty-six Ghosts." Abbot Raigo turns into a rat: Â When Emperor Shirakawa was without a male heir, he asked Abbot Raigo to pray for him. Â After Price Atsuhisa was born, Raigo asked that an ordination platform be built at his temple, but Shirakawa refused. Â Raigo starved himself to death, the Prince died, and Raigo's vengeful spirit came back as a plague of rats.

Raigo was a stern man, a priest whose duties included maintaining discipline among the acolytes of Mii Temple. Â A member of the influential Fujiwara family, he became spiritual adviser to Emperor Shirakawa (reigned 1072-86). Â For many years Shirakawa had no male heir by his Fujiwara empress and made several pilgrimages to Mii Temple in Kumano to pray for a son. Â An heir, Prince Atsuhisa, was at last born as a result of Raigo's prayers.

Shirakawa was overjoyed and offered Raigo anything he wanted. Â Raigo asked nothing for himself but requested a raised platform for his temple upon which prayers could be offered. Â This was a privilege granted only to the fortified monastery of Mount Hiei, a stronghold of the yamabushi, literally "mountain warriors." Â These warrior-monks were a constant menace to Kyoto, periodically sweeping down and terrorizing the capital. Â Shirakawa (who had once complained that the fall of the dice, the waters of the Kamo River, and the monks of Mount Hiei were the only forces he could not control) was too afraid to grant Raigo's request.

Raigo was infuriated. Â He retired to his cell where he shut himself away and refused to eat. Â Shirakawa sent conciliatory messages, but Raigo was implacable and eventually starved himself to death. Â Prince Atsuhisa died soon afterwards. Â Raigo's vengeful spirit changed into a thousand rats which infested the temple, destroying the Emperor's sacred books and scrolls and doing untold damage.

Here we see a transformed Raigo, still in his priestly robe, chewing on a folded book. Â His ears and nose are not quite ratlike and suggest his human past. Â Smaller rats assist him in his destructive work, and a pack of rats dashes by excitedly in the background. Â A wood-grain pattern has been carefully carved into the block used for printing the cypress column. Â The robe is oxidized and has curiously jagged folds, echoing the folded book and Raigo's vicious teeth.

Your current search criteria is: Objects is "The Priest Raigo of Miidera Transformed by Wicked Thoughts Into a Rat".