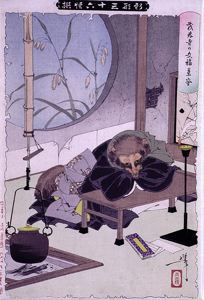 Commentary
Less dangerous than the wicked fox spirit, the tanuki, or racoon, is a favorite shapeshifting trickster in Japanese folklore. Tanuki typically transform into Buddhist priests in order to beg for food and sake. This print illustrates the story of a tanuki who was saved by a woodcutter and, out of gratitude, turned itself into an iron tea kettle, which the man then sold for a good price to a Buddhist temple. However, when a priest hung the kettle over the fire to boil water, the tanuki screamed, transformed back into its true form, and escaped, making its way to the woodcutter. It then performed as a dancing tea kettle, earning a fortune for the man. Here, the tanuki wears a priestâs robes and has dozed off reading a Buddhist text. Hanging over the brazier is an iron kettle â alluding to the other form a tanuki can take.

Note: XXXIV (p.86-7) of "Yoshitoshi's Thirty-six Ghosts." The teakettle of Morin-Ji: Â When a woodcutter saved a badger's life, the animal transformed itself into a teakettle which the man could sell to a temple for cash. Â The badger did not like life at the temple, since the monks were constantly heating water for tea, and so the animal occassionally would assume a monk's form to cool off.
Marks
On mat, in pencil: Marer 427, exhib. 11/93, Thirty-six Ghost Stories. Description on verso of mat. Artist's seal: Taiso. Signed: Yoshitoshi. Carver: Chokuzan to. Engraver: Â Chokuzan.Â Â Printed: Â 1892.
Medium
Colored ink woodblock on paper; oban.
Object Description
Meiji period Japanese color woodblock print with an image of an animal dressed as a woman with a table and tea kettle.

Once upon a time, a woodcutter saved a badger's life. Â In gratitude the badger, which, like a fox, is capable of many transformations, turned itself into a tea kettle. Â The woodcutter sold the kettle to a priest at Morin Temple in the town of Tatabayashi. Â But life in the temple was not comfortable for the kettle. Â One day as the priest placed it over a fire, the kettle sprouted legs, turned into a badger, and started running around the temple in search of a route of escape. Â The temple acolytes chased it from room to room before finally catching it. Â They placed it in a box, where it resumed its former appearance.

There are two endings to this story. Â In one, the badger escaped from the temple and ran back to its woodcutter. Â The man became a travelling entertainer, the kettle dancing and playing tricks and earning his benefactor a great deal of money. Â In the other version, the monks of the temple decided after the startling transformation that the kettle was too special an object to be used for such a mundane purpose as boiling water. Â It remained in its box, and thus lived comfortably and lazily ever after.

In this print a delightful badger sits with its head resting on its paws, looking at us with the quiet detachment of an animal. Â It wears a priest's robe. Â Apparently while in the temple it was in the habit of transforming itself into a priest. Â One hot afternoon when it took a nap, it forgot to maintain its priestly disguise and appeared as a badger.

A kettle hangs over a sunken fireplace, echoing the story; a book of scripture lies on the floor. Â With tall flowering grasses at the open window and susuki grass painted on the sliding door of a cupboard, the dilapidated room looks almost like a wood animal's lair.