The Ferocity of Tametomo Driving Away the Smallpox Demons 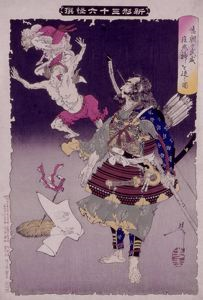 In this print, the artist Tsukioka Yoshitoshi depicted a legendary 12th-century hero, Minamoto no Tametomo, who succeeded in vanquishing demons who caused disease. Tametomo was extremely strong and highly skilled in archery, but he was tempestuous and often became embroiled in arguments, which resulted in exile to distant islands. In a 19th-century version of his story, he was banished to Okinawa. When the island was threatened by hososhin, the demons that cause smallpox, he chased them away and became a hero to the island's inhabitants. In this printâone of his series of 36 depictions of supernatural beings, Yoshitoshi portrays Tametomo standing holding a large bow and glaring at two terrified smallpox demons who flee to the upper left. At his feet is a talisman meant to protect against disease.

Minamoto no Tametomo was, like Oniwaka (Benkei), an extremely violent youth. Â By the time he was fifteen he is reputed to have been over seven feet tall. Â His left arm was four inches longer than his right, which meant he could bend his bow much further than other archers. Â This bow was eight feet long, and it took three ordinary men to bend it; his arrows were five feet long, their iron points as heavy as spearheads.

Your current search criteria is: Objects is "The Ferocity of Tametomo Driving Away the Smallpox Demons".