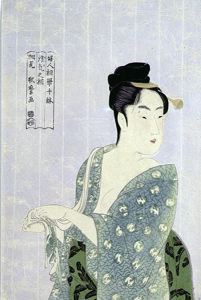 Essay:
Kitagawa Utamaro was a Japanese woodblock printer in the late 18th century and was known for his single sheet work depicting courtesans. He was an innovator in terms of the designs and formats for the Ukiyo-e tradition. He was hired by an Edo publisher, Juzaburo, and was most prominent in the 1790s. He was somewhat influenced by the artist Torii Kiyonaga in that his women are also depicted as tall and substantial, following what was considered beautiful in a woman at that time. He spent a lot of time within the brothels of the Japanese pleasure quarters and was able to see the courtesans during their free time. Many of his bijin-ga are intimate portraits of the courtesans opposed to the many other posed portraits advertising the services of the brothels or showing the high sophistication and fashion of the courtesans. You can see the marks of the publishing house and the governmentâs seal of approval in the text accompanying the text. One of the goals of the publishing house Utamaro worked for was to advertise the latest kimono textile designs and so that was part of Utamaroâs focus. This image shows a courtesan perhaps getting ready for bed. She is holding a towel, since she has, perhaps, just finished washing her face. Her kimono is slipping off, clearly showing she is no longer concerned with her appearance for the day. Although her hair is still styled this print suggests that she will soon take it down. Some of Utamaroâs prints did show courtesanâs hair falling out, a contrast to the very stylish and well coiffed appearance of these women typically seen in woodblock prints which served to advertise certain courtesans and brothels. These intimate portraits have a much more relaxed sensibility to them. Although her face seems stylized in a very typical way for the time, Utamaro made subtle differences between his faces. Usually faces were depicted with simple lines for eyes and a hook for a nose and, even though his lines are minimalistic, the faces are not meant to all be identical. For example, Utamaro would give a subtle change in how the nose is curved between two faces to show a little more of the subjectâs expression and identity. This courtesanâs face is very elegant and beautiful and remains very sensual, through the small smile, despite her relaxed context. Besides these subtle details of the face, Utamaro also spent a lot of attention in the detail depicting her hair. The tiny lines he designed, that had to be accomplished by the carver, add extra texture and detail to the print. Not only can you see those lines from where her hair is pulled back, but also in her eyebrows. To add even more texture, Utamaro makes great use of the blind printing, or embossing, technique to make the lines in the background. He also added mica powder, which creates a silvery surface on the context that adds a dreamy and intimate mood to the scene. Her kimono is intricately designed, the characters within the circles may have some sort of significance, and her obi shows an interesting feather pattern. This print is enjoyable because it is simple yet interesting to look at with its subtleties.


Marks
On verso, in pencil: Johnson VI 43. On mat, in pencil: Utamaro reproduction by Takamizawa. Signed: Somi Utamaro ga (drawn by Utamaro the Physiognomist). Censor's seal: Kiwame.
Medium
Colored ink on paper, mica background. Woodblock print.
Object Description
IEdo period color woodblock print with an image of a woman.
Publisher
Koshodo (Tsuta-ya Juzaburo) seal.
Keywords Click a term to view the records with the same keyword
This object has the following keywords:
1701-1800, Females, Reproduction
Portfolio List Click a portfolio name to view all the objects in that portfolio
This object is a member of the following portfolios:

Your current search criteria is: Objects is "The Fancy-free Type (Reproduction)".