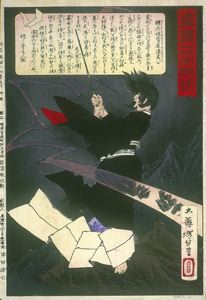 Commentary
Sugawara no Michizane (845-903) was a scholar, poet and politician who was widely respected for his scholarship and knowledge of Chinese language and literature. He rose to a high position in the Imperial court but became embroiled in court politics and was exiled to a minor government post in Kyushu, where he died. Shortly afterwards, the capital was ravaged by a plague and drought followed by rainstorms and flooding, and the Imperial palace was struck by lightning. The court attributed these disasters to Michizaneâs angry spirit, or onryÅ, the subject of this print by Yoshitoshi. The emperor ordered the construction of the Kitano Tenman Shrine in Kyoto to honor Michizane and appease his spirit. Several decades later, Michizane was deified as the kami of sky and storms and given the title Tenjin-sama. In the Edo period, Tenjin became known as the kami of scholarship.

As a scholar and poet Michizane (845-902) was the chief advisor to Emperor Uda (867-931, ruled 887-897) but was forced out of office after the emperor abdicated. Accusations of corruption and political intrigues resulted in Michizane's exile to northern Kyushu, where he died declaring his devotion to the emperor and innocence of all charges. In the next few decades, natural disasters in the capital city of Kyoto and the violent deaths of his accusers were attributed to the wrathful spirit of Michizane. In order to placate him, Emperor Murakami (ruled 946-967) restored all rank and honors to Michizane and ordered that a Shinto shrine be established near the imperial palace at Kitano, so that this faithful public servant could continue to safeguard the nation as the god Tenjin.

Since 947 the Kitano Temman Shrine has been one of Japan's most important pilgrimage destinations. Poets and calligraphers come to honor Michizane, who was skilled in both Chinese and Japanese verse, and students come to ask his assistance with exams.

The biography of Sugawara Michizane and the history of Kitano Temmangu have been popular in Japan for more than 1000 years, inspiring paintings and prints as well as theatrical productions.
Publisher
Tsuda Genshichi.
Related Objects
Back to back print with 93.6.121. No. 2.
Keywords Click a term to view the records with the same keyword
This object has the following keywords:
1880-1885, Mythological Humans
Additional Images Click an image to view a larger version